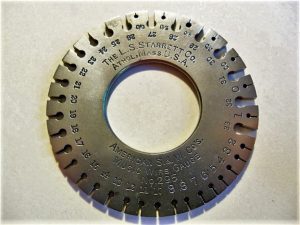 This was their large version, with sizes smaller and larger than what is used in modern pianos.

The smaller Starrett gauge, No. 280, is the one that was most used by piano tuners. The Starrett No. 280 was a direct copy of the Darling, Brown, and Sharpe gauge pictured below: 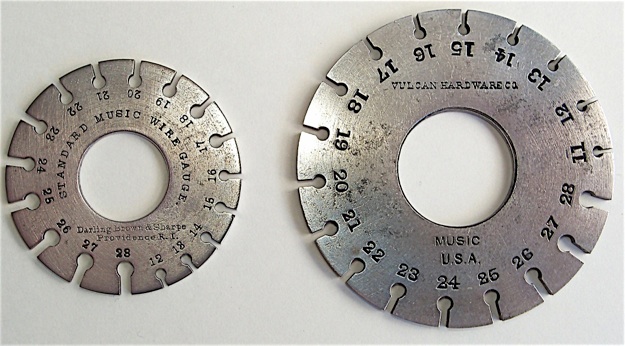 Vulcan wire gauge. Vulcan Hardware Co. was a manufacturer of wire gauges in the late 19th century, based in Bergen County, New Jersey. Brown and Sharpe is the oldest surviving machine tool company in the United States, and the partnership with Darling dates this music wire gauge to before c. 1892: 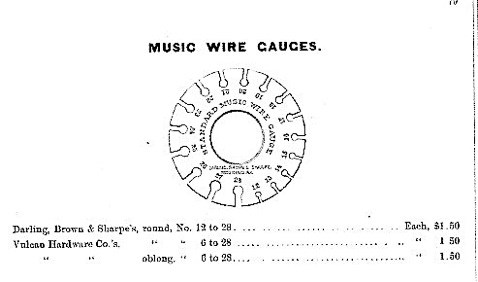 Smith music wire gauge. Warrington, UK, was a center for general steel wire making in the 19th century, and through much of the 20th century. Houghton’s music wire, was also made in Warrington. This gauge is dated 1892. 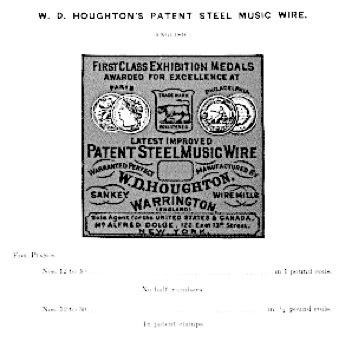 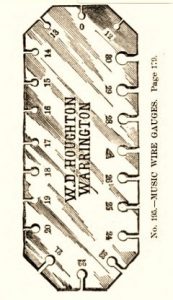 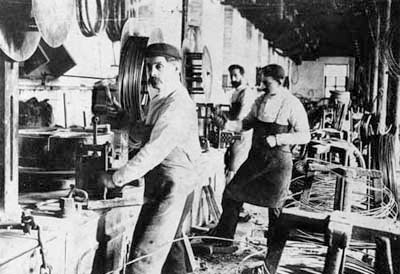 Wireworkers in the Ryland works in Warrington, UK. Photo courtesy of the Warrington museum.

Music wire gauge by H. J. Fletcher before their merger with Newman & Morgan, another piano supplier, in 1958.

J.& J. Goddard piano and harmonium suppliers, established in 1842 and operating from the 68 Tottenham Court Road, London until 1968. Their signage is still up on their old building. 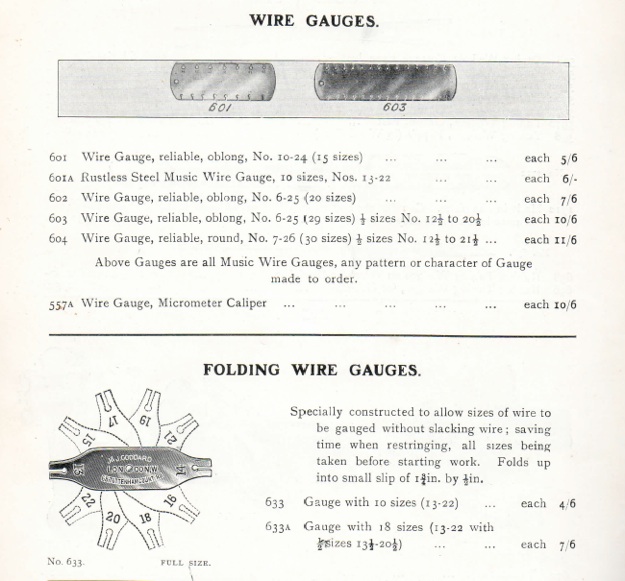 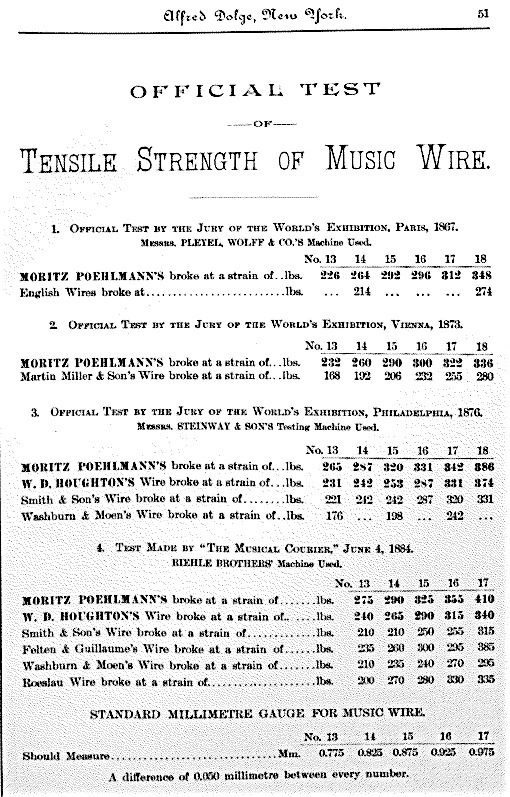 Competition between music wire makers. Many of the major manufacturers of music wire in the 19th century are represented. Alfred Dolge catalogue 1869–1892:

“Should measure,” are the operative words here. There are actually significant differences between the wire sizes of various nineteenth century string makers, despite the fact that they used the same gauge numbers, which present- day restorers of historical and elder pianos are well aware of.

This is a chart of wire sizes as measured by Puresound, makers of stainless steel wire for early 19th century pianos. I figure that it could be considered a snapshot in time, as there was likely variation between batches of string within a string maker’s output. I added the sizes for American Steel and Wire. 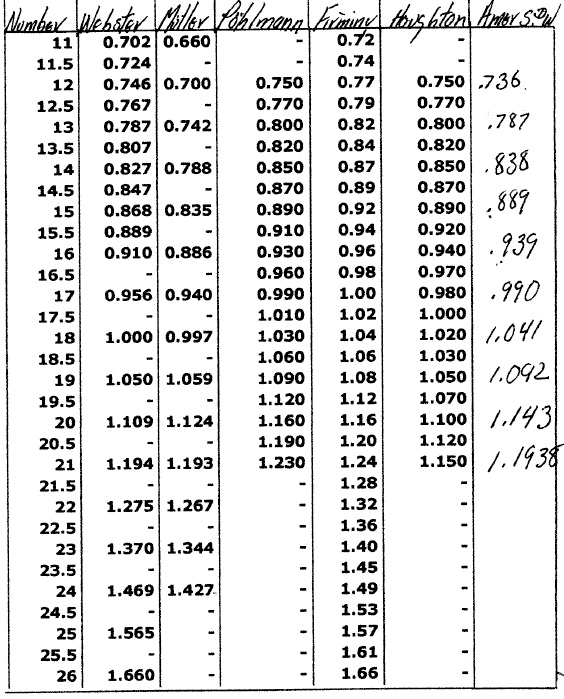 Two earlier types of wire gauges as shown by Sievers in 1868. A slip style and an adjustable gauge. These types had advantages over the slot and hole types in that they showed increments between indicated sizes. The slip style is still used for measuring universal bass strings. 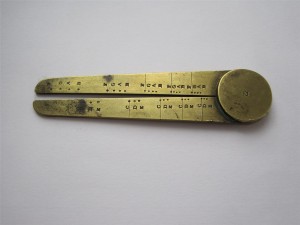 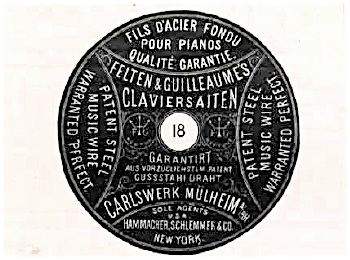 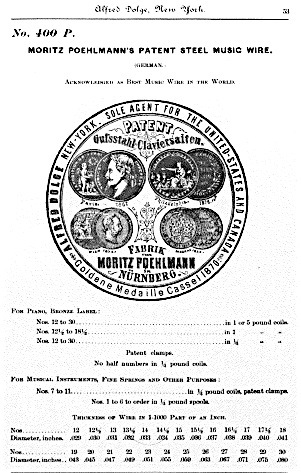 Poehlmann’s music wire. Poehlmann was a dominant wire maker in the second half of the 19th century, and Alfred Dolge was their exclusive U.S. agent for some time. 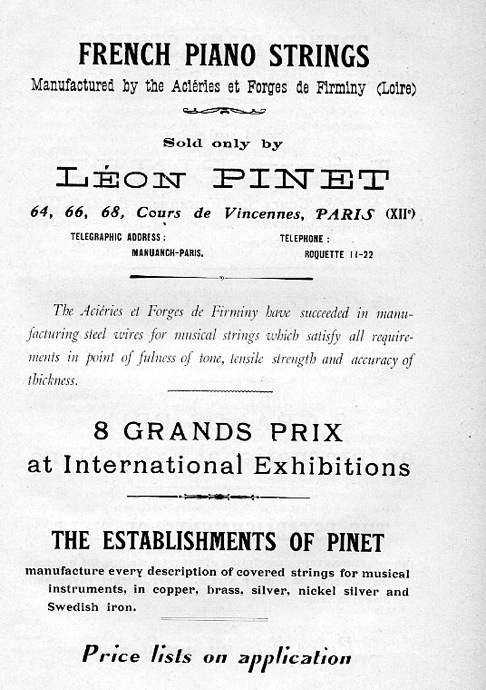 Firminy music wire was used by many French piano manufacturers, such as Erard, Pleyel, Gaveau, and the smaller makers, during the late 19th century, into the 20th century.