Napoleon Erlandsen and his son, Julius, are well recognized by tool collectors and trade historians for their hand planes and bow drills, but it is not as well known that they manufactured many of the more specialized tools for servicing and manufacturing pianos. These tools were commonly rebadged as Hammacher Schlemmer piano tools.

Erlandsen made a full line of regulating tools.

Driver placed on the “let off”, or escapement adjustment eyelet screw on a vintage Steinway grand action model. This action model is #37 in a series of 100, made in 1953, to celebrate Steinway and Son’s Centenary. This belonged to my late business partner, and I received the model along with his workbench and vintage tools in 1986. The damper action is not included in the Centenary model: 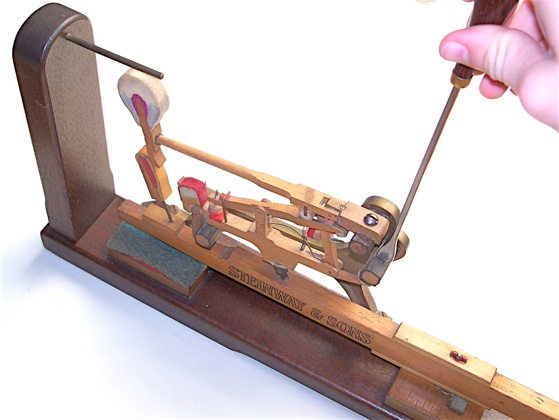 Various let off screwdrivers: Top to bottom: Hammacher Schlemmer and Co., New York, top three; C. H. Lang, Chicago; Hale, Boston; The remainder, below, are unmarked. Part of the charm of these old tools is their handles, which are mostly rosewood, with attractive turnings. These handles represent a wide variety of user preferences. A discussion of handle matching can be found on the Combination Handles page. 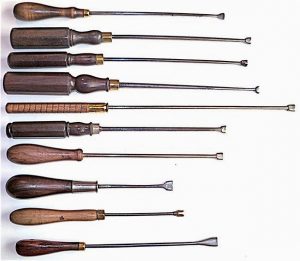 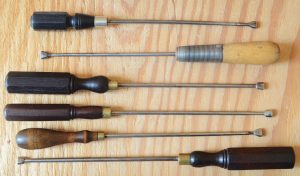 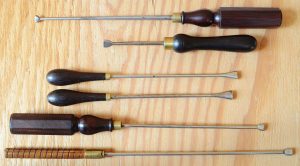 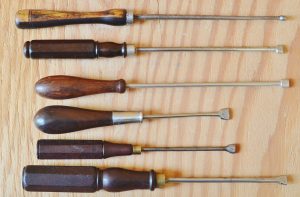 All unmarked let-off tools, with various handles, shank lengths, and shapes of socket.  Interesting variegated pattern on the example at the top; rosewood with sapwood mixed with heartwood.

The socket greatly affects the way these let-off tools perform, and with these antiques, there is considerable variation.

Very old 19th century driver, shown at the bottom of in the large photo above, revealing wear in socket.

Socket opened up, allowing for driving at greater angles.

Very narrow opening; tool must be used straight up and down or regulation eyelet will be bent or broken off!

Most tuners improvised some of their tools (just like today). Both of these tools used a screw as their basis: a slotted drop screw adjuster, and a short let off tool that is simply a screw with a deepened slot that allowed for use at various angles. 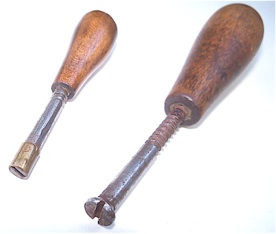 Screwdrivers found in piano kits. An advantage of having individual handles for these tools is that the size and shape of the handle can be chosen for a particular function or intended use, not unlike the mating of an appropriately sized handle for a particular chisel. Individual preference also entered into this. 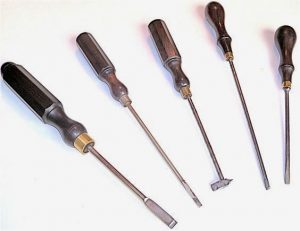 Early rosewood screwdriver, from Hornung piano factory, San Francisco. Two rosewood handled tapered reamers for wool action bushings. Rosewood was discontinued for these small reamers by all piano suppliers (to the best of my knowledge) before 1910. 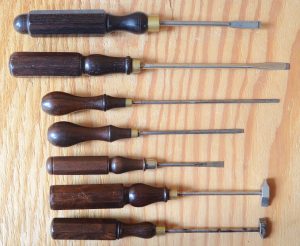 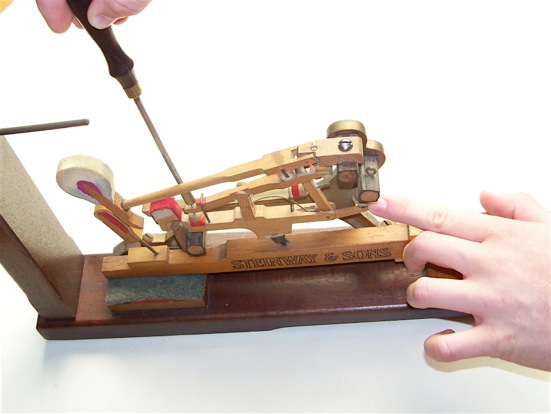 Balancier height adjustment screw. Thanks to my son Jeremy Shepherd (c.2009) for the extra pair of hands in these demonstrations. 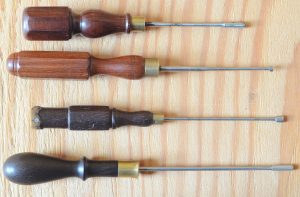 Super high quality in these antique drop, or balancier regulators. Don’t believe all the naysayers when it comes to the ‘old timers.’

Close-up of an old drop adjusting tool. Cutting a slot in the shaft and placing a sleeve over it, was a common method for creating the small slot socket.

Although not action regulation, installing bridle tapes in old uprights was a frequent job for many years. Before WWII, installing bridal tapes was done by tacking them to the hammer butt, rather than using a cork attached into the hole of the butt catcher, which was patented on June 15th 1920, and widely practiced by the 1930s. Bridal tack inserter with full package of bridal tacks: 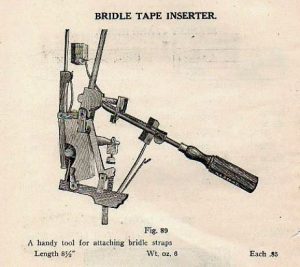 Three different designs for the bridle tack inserter. The top example became the the standard design. In the 1930s, the clip-on and cork bridle tape replacements superceded the traditional bridle strap that was attached by a tiny tack.

Tuck Mfg. Co., Brockton, MA, provided at least some of the rosewood handles for the tools shown here and in the catalogs. In my opinion, these handles, used for piano regulating and repairing, and other tools too, were some of the finest available in the United States in the late nineteenth and early twentieth centuries. The shape shown below is a slight variation on the London pattern handle, and most of the other regulating tool handles, without the round section at the end, are known as common octagon handles. 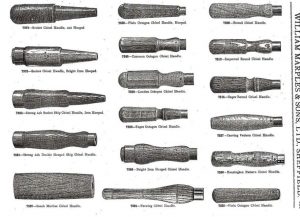 From Marples, Sheffield catalogue, 1903, which showed the myriad handles available then.

Hammershank reducer mounted on Tuck type handle. Another method of refining the fit of new hammers onto shanks. 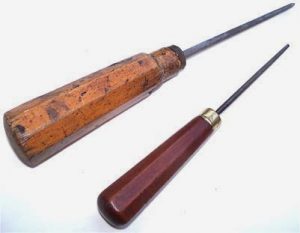 Examples of two tapered octagonal handles, which is an older handle shape, going back to the 17th and 18th centuries. Ferrules were added later, in the 19th century, and these were often used for chisels. At the top of the photo is a reamer, slightly larger reamers are used for reaming the bored holes in the grand hammer moulding, to refine the fit of the shank in the hammer moulding before gluing and hanging. The small tool with a rosewood handle is a small rat tail file that was found in a piano kit, probably used to slightly enlarge the balance holes in keys where the balance rail pins were binding. 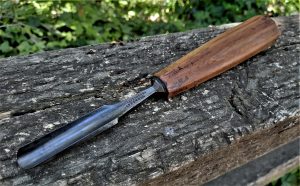 This Wm. Greaves gouge was probably made in the 1820s, but was done in the 18th century practice, with an octagonal bolster, and matching facets on the tapered octagonal hickory handle which was very likely original.  The wood of the handle would be fitted to the back of the bolster, which, in those days was not always flat.  I doubt that the leather washer would have been necessary in this case.  A bolster was needed to protect the handle from splitting when tapped with a mallet.  Before 1840, circular pipe stock was not readily available, so the large bolster was the solution.  The bolster was slipped over the tang hot, and once cool, was permanently fastened in place. 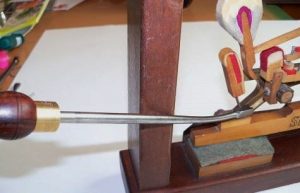 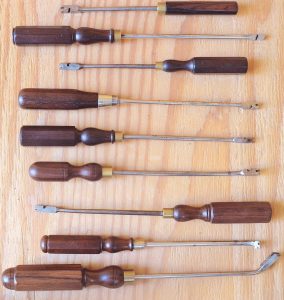 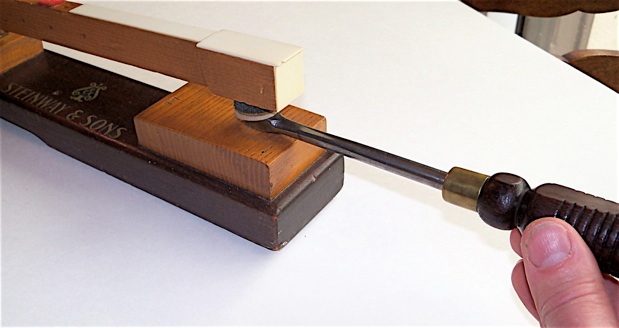 These very long key spacers (14″ to 17″ not including the handle) were made for factory use, and the length allowed workers to stand back and have the entire keyboard within the field of view, while actively working. It’s one of those details that makes a tremendous difference when when producing volume work at the same task for the entire work day. 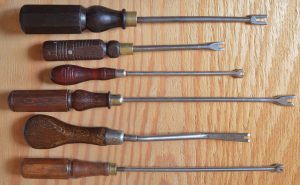 Key-spacing tools. Top: unmarked, and heavily constructed, from Hornung factory; American Felt Co.; and H. S. and Co. The tool at bottom is not bent, it’s just a distortion by the camera lens

H. S. 1925 catalogue. It’s identical to the example above as well as the Erlandsen key spacer included in the catalogue illustrations at the top of this page. 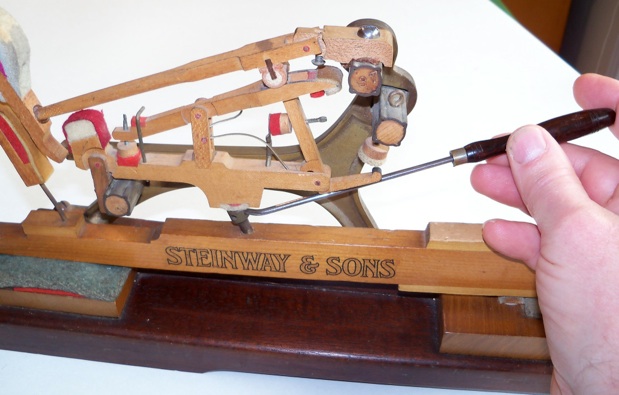 Capstan adjustment, and a closer view of the Steinway and Sons Centenary action model #37, c. 1953. 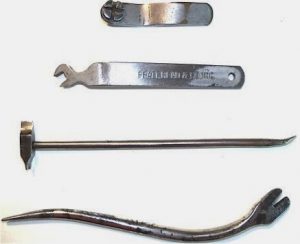 Damper wire adjusting tools, although sometimes listed in the old catalogs as backcheck tools. Top two are unmarked; bottom three were sold by Hammacher Schlemmer. The tool at the top has a handle made from a maple dowel, stained and varnished, probably from the 1920s. By this time, production of these tools with increasingly costly and space-consuming rosewood octagon handles became less of a standard practice, and by the 1930s, most regulating tools were sold with a specialized base made to be fastened into the socket of the combination regulating handle. Tools in the middle and bottom have an offset shaft. 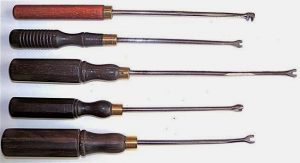 Various wire bending tools. Hale example at the top; Hale went to a cheaper, stained hardwood dowel for their fixed handles in the early 20th century. 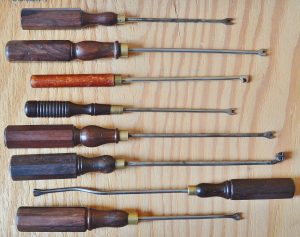 Upright spoon benders, to adjust damper timing to the key stroke. This is done blindly, and takes some practice to acquire a ‘feel’ for the damper spoons at the back of the action wippens.

Top: unmarked, nickel plated, with a London pattern rosewood handle; Trefz Co, with a twist, intended for use without a handle.; H. S. and Co. (Erlandsen 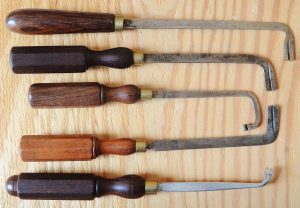 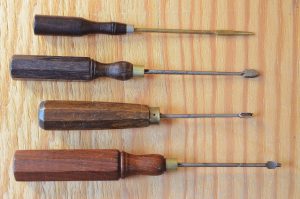