I never saw a Mueller hammer with an aluminum handle, but it is interesting to see that alternative materials were advanced to production, even back in 1903. The locking nut which compresses the collet to secure the adjustable shaft was not a new idea. That idea was introduced by Francis Hale in 1885. 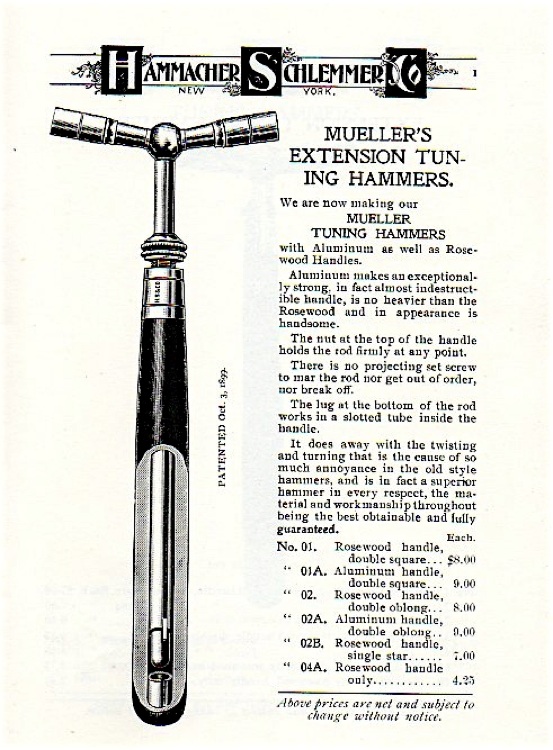 Charles R. Mueller was born in Newark, New Jersey on 3 October, 1863 to German born parents.  He became a machinist, and married Rose Kern in Detroit Michigan in 1890.

Although the obituary stated that Charles R. Mueller Sr. moved to Detroit in 1870, there was evidence that Charles Jr. either stayed behind, or returned to New Jersey, as revealed in the 1885 N.J.Census.  Charles R. Mueller Jr. maintained ties to New Jersey as late as 1899 as that was where he declared residence in his 1899 tuning hammer patent.  Charles and Rose had two sons, Charles III and Edward.  Mueller operated his own machine shop, which employed several other people.  Charles’ business must have been successful because after 1910, he bought his own house, and by 1920, he had paid the mortgage off.  Much of Mueller’s work was fabrication, repair and maintenance of  printing presses, a trade he assumed from his father. 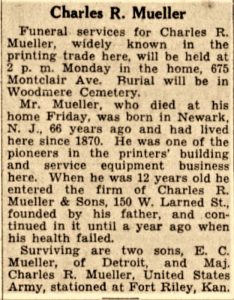 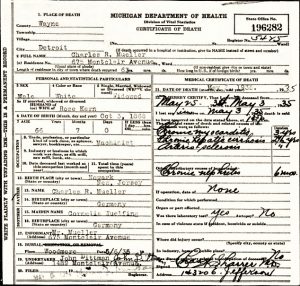 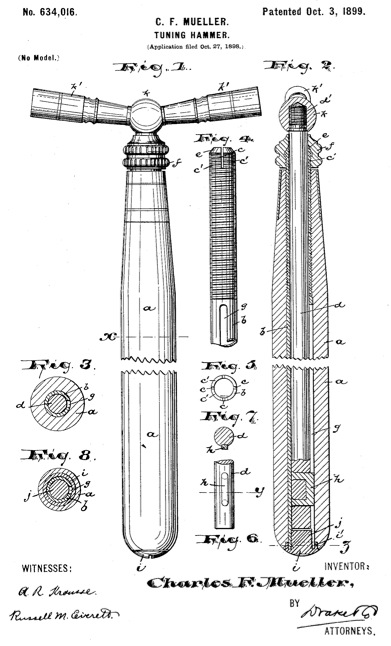 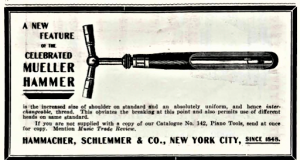 1903 advertisement from the “Musical Merchandise Review,” introduction of the New Standard Thread. 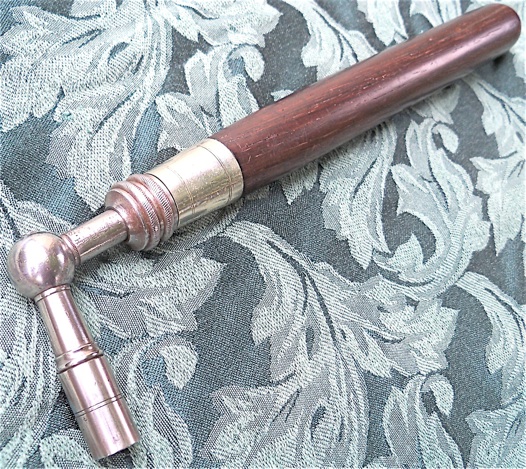 With “E. (Erlandsen) Manufacturing Co.” engraved on the tip. 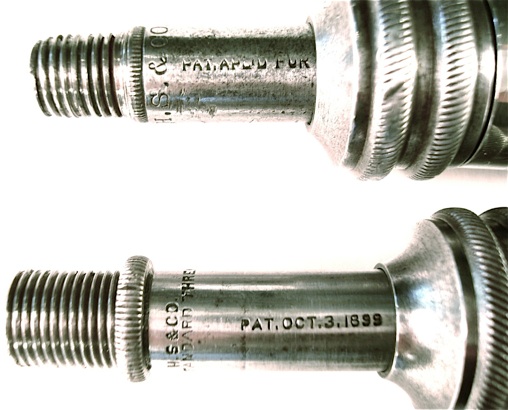 Both have a straight, and not tapered, thread with a friction mating/locking surface. The earlier version has a smaller diameter thread compatible with other Erlandsen hammers, and the later thread has a larger diameter, almost as large as the diameter of the shaft itself. A locking ring has been added to provide a secure fit. 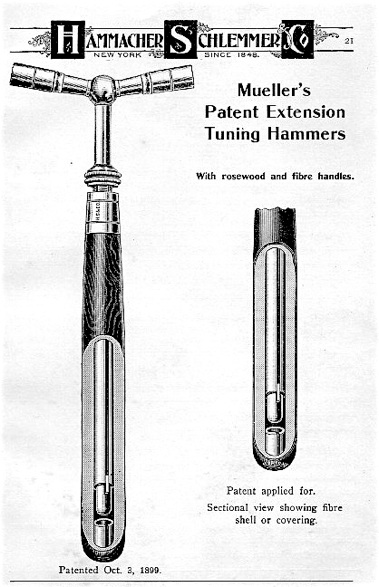 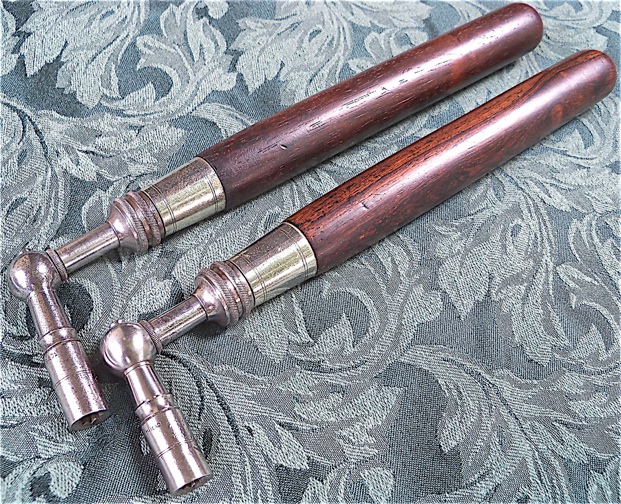 Handled by Hammacher Schlemmer & Co. Since 1891 with Much Success–Expert Tuners’ Suggestions Followed in Latest Improvements

Hammacher Schlemmer U& Co., New York, describe a Mueller patent extension tuning hammer, shown in the accompanying illustration, as follows, in their catalogue:

These hammers have proven satisfactory in service since we first introduced them in the piano world in 1891.  We have caused further improvements to be made, partly in accordance with suggestions made by expert tuners, and partly to secure increased mechanical strength and absolute rigidity, until we have evolved what we fully guarantee as an ideal tool.  The absolute uniform, interchangeable thread has proven so strong and generally satisfactory that it has upon retained, with the added improvement that the end of the rod and the bottom of the recess in head are equally tapered to a perfect fit, which binds the head to the road almost as solidly as if the two were in one piece.  This taper feature prevents the use of the old style heads on the new handle, but the old style heads may be tapered to fit at a minimal cost.  The rod itself is one solid piece of of polished tool steel, the upper end being mushroomed out sufficiently to make the knurled overhang which supplies the tapering fit (mentioned above) for the head.

These improved hammers are fitted with a new locking device which grips the rod and handle so tightly that they become as rigid as one piece of solid steel  A threaded steel tube about 3 1/2 inches long, made with two slots on opposite sides, is secured firmly to the handle.  Two tapering blocks slide into these slots and are almost attached to the knurled nut, which, when screwed over the threaded tube, forces the blocks into tapered slots securely gripping the rod at any point desired.  One of the tapering blocks slides in a keyway which runs almost the entire length of the rod, preventing the road from turning and assuring absolute rigidity when locked.

The handles are made of vulcanized fibre (either black or red).  The characteristics of vulcanized fibre are such that it makes an ideal tuning hammer handle.  It has the consistency of horn, great strength, is tough and durable, and improves with age, and it does not warp or shrink, it is obviously a handle far superior to one made of wood.

The head, rod, knurled nut with sliding blocks and the threaded tube are all made of the highest quality of tool steel, and the complete hammer is finely finished and polished.  The cut illustrates the shape and style of the tool complete, also showing exact details of the keyway, knurled nut with sliding blocks, and threaded tube, as well as the tapered fit of the head to the rod.

Three Mueller ‘Improved’ Extension Tuning Hammers. These were made around the WW1 era, and through the 1930s; the one on the bottom is an earlier version, the same as the illustration in the article above.

There are three different years given for the Mueller introduction/patent: 1891 in the Music Trades Review, Oct. 3, 1888 as inscribed on this hammer (I’m not sure if this is a mistake–it does not look like an over-impression of nines), and Oct. 3, 1899, the actual patent date. This is the earlier version with two tapering blocks as described in the above article:

Historical inaccuracies were common in the U.S. trade catalogues, even when it pertained to their own history. Apparently there were/are no history majors on staff! 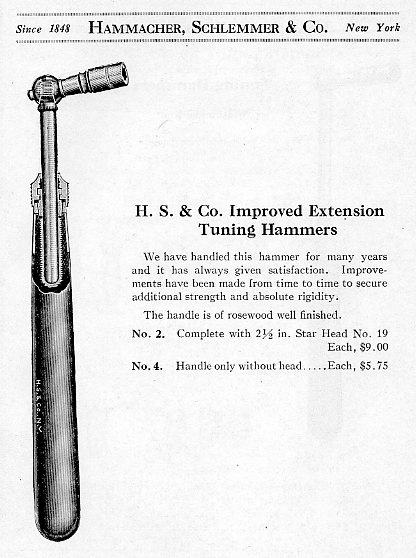 Here is the hammer in the 1925 catalogue. The reference to Mueller was omitted, which made sense, because it was not very similar to the classic original Mueller hammer. 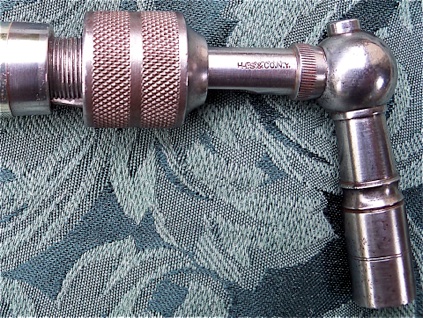 The inscription was overstruck.

This is a later version, which has a larger adjustment nut, and only one tapered wedge that works on a flat part of the shaft visible in this photo. It was made by Julius Erlandsen through the 1930s, and as late as 1940. Both versions securely lock down the shaft in a positive manner 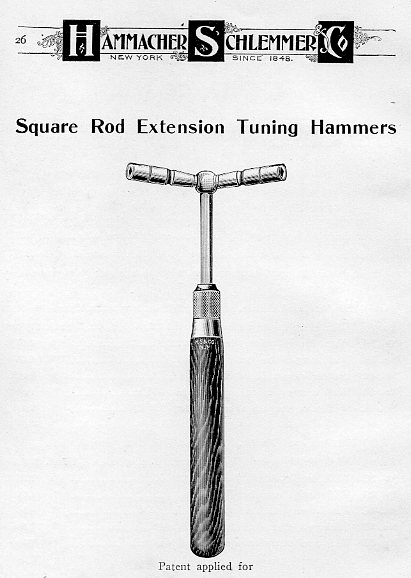 The square shaft never rotates. I’ve not seen this in other tuning hammers; it works.  1918 H.S. catalogue. 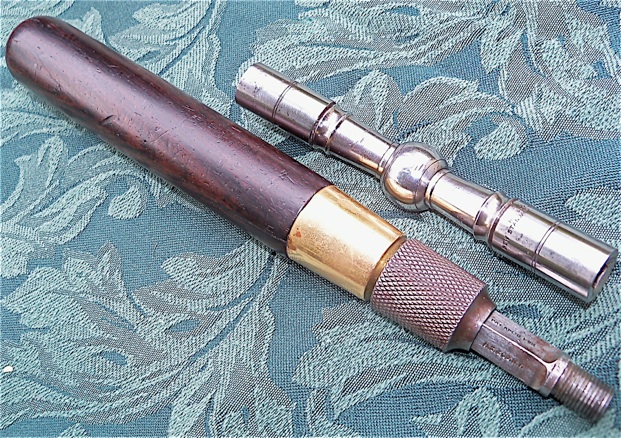 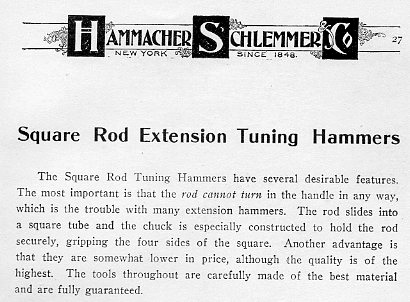 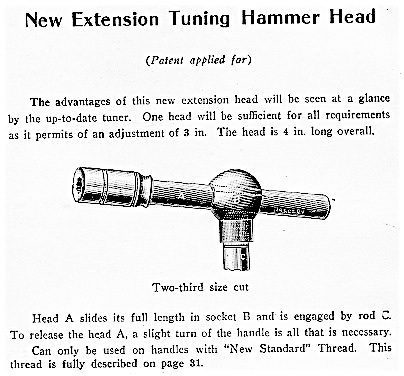