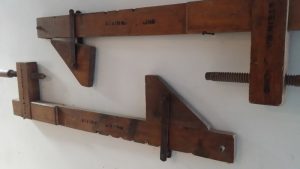 Piano clamps from the Steinway factory, circa 1900. From transportaccord.com 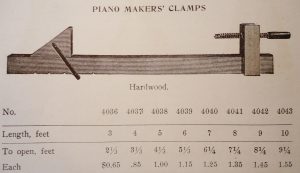 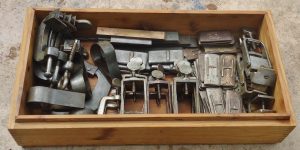 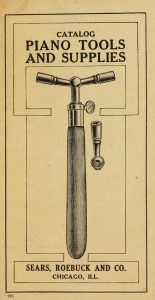 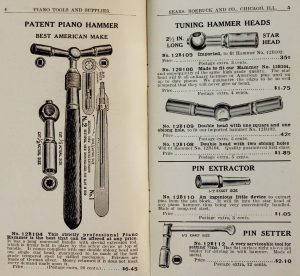 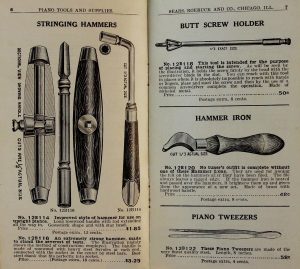 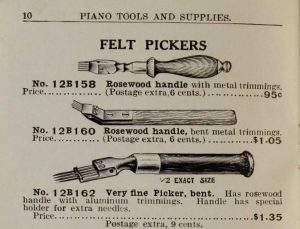 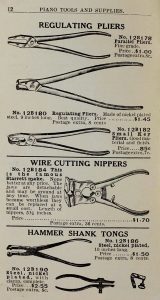 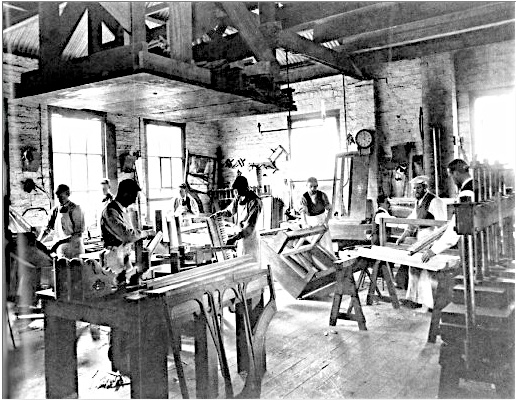 Howell Piano Factory, New Zealand, 1898. Here is a typical early photographic example of piano factory workers, at their work stations. While the products worked on are relatively apparent, its hard to ascertain precisely what the employees were actually doing.  Otago Daily Times, April 28, 2012 –Geoff Adams.

Archimedean drills found within a set of British piano tools. Not to be confused with bow drills, they produce a reciprocating or continuous motion by sliding the middle handpiece up and down. Archimedes, an ancient Greek scientist, invented a screw which pulls water from a lower body to a higher plane; the drill was actually a 19th century development.

Demand is such that several sources provide new Archimedean drills. 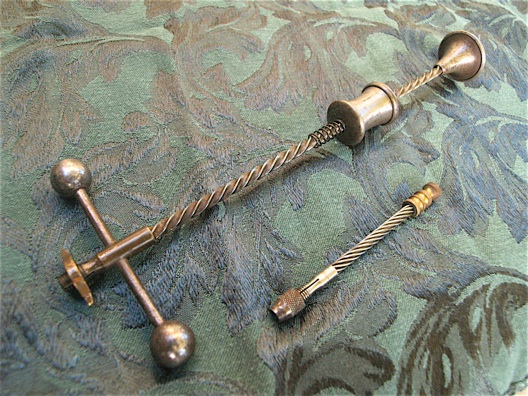 Antique rosewood brass and steel piano action spring making tool. This tool is no longer available in the U.S., but can be found from Fletcher & Newman in the U.K. and Renner in Germany. It looks like there is a reference to Germany faintly inscribed on this one: 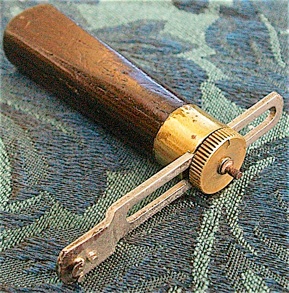 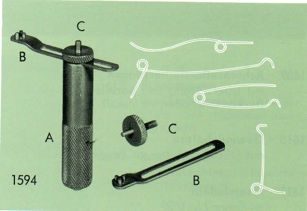 Trefz and Co., Philadelphia, c. early postwar. Regulating rack, used to recreate hammer escapement and drop positions with the action out of the piano. This example was made with bird’s-eye maple, which I’ve never seen in more recent examples of this tool. 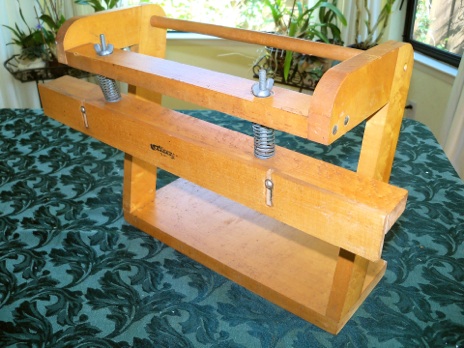 Damper felt guillotine, from the Weber Piano Company, founded by Albert Weber, in New York, in 1852. At 20 inches long, and 10 inches high, this is a serious felt cutter, larger and heavier than any of the guillotines that I’ve seen produced for the piano service trade. It still cuts very well, without the side effects of repeated sharp impacts on my palms that I’ve received from using other guillotines with a vertical plunger: 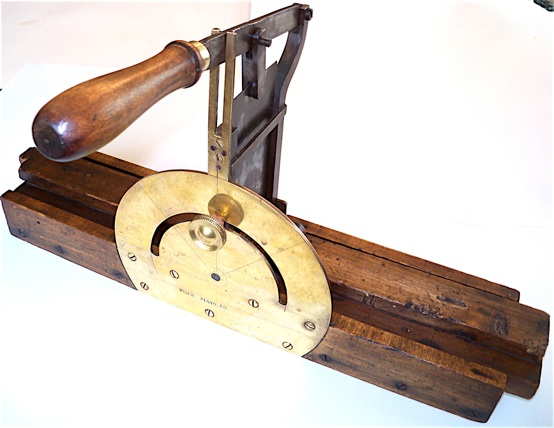 This “bass string retoner” was designed to improve tone quality on bass strings by compressing the copper windings against the steel core instead of twisting them! An invention by Lawrence Alnutt, intended for dealers and others in the piano business. I had marginal success, at best, when experimenting with this tool. This invention went nowhere, and therefore is quite rare; beyond the novelty and curiosity factor, it has received little attention, perhaps deservedly so: 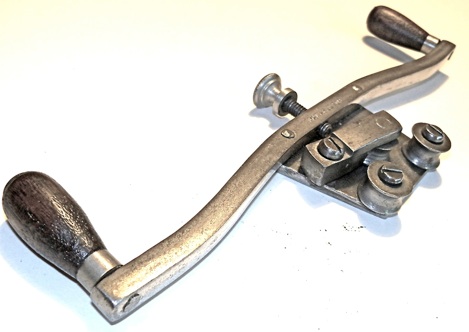 Close-up of the manufacturer’s imprint. 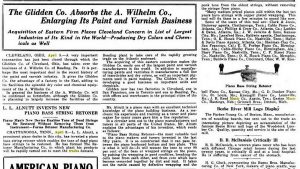 Alnutt’s Bass String Retoner, as described in the April 12, 1919 edition of the “Music Trades Review.”

Hand vise, useful for holding very small parts in the field. This example is very similar to the hand vise depicted in “L’Art De Accorder,” written by Montal in 1836, shown on the “Tuning Hammers” page. This was probably made in England. 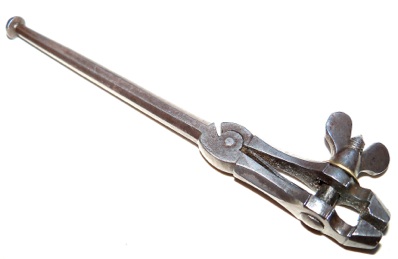 Beautiful hand vise, for holding small work on the go

Excerpt from text of patent: 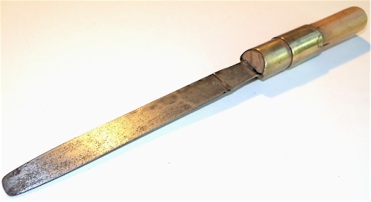 Feeler for checking the glue joints of soundboard ribs (and other things). Spruce handle. 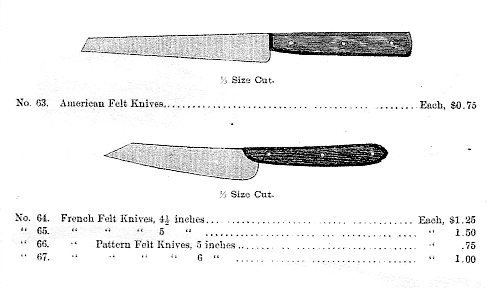 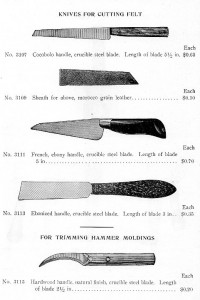 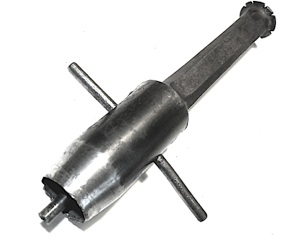 Punch for making your own front rail punchings. This tool was included in the 1885 H. S. catalog. 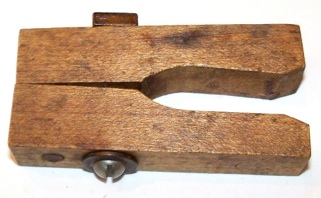 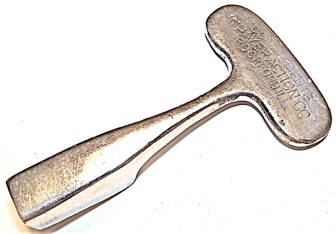 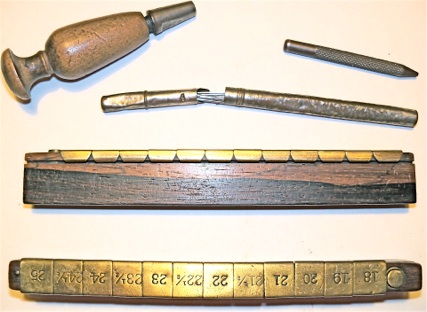 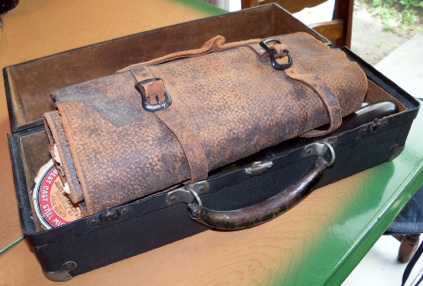 Tuner’s antique satchel and tool roll, made of Moroccan leather.

“The piano doctor.” My business partner, now deceased, used this to carry his tools. I tried it, but was underwhelmed by the lack of accessibility through the top opening and the lack of space. It was another example of form over function. Besides, I wouldn’t want to invite anyone to make more “piano doctor” jokes. 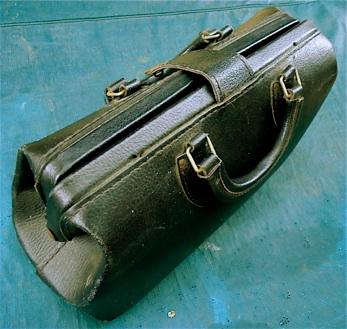 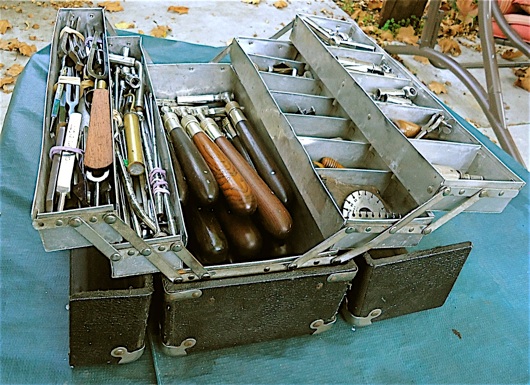 “Gnome Brand” Tuners’ case. This was included in the 1925 H. S. catalogue, and when I started working on pianos at the end of the 1970s, this case was still available from Tuners Supply (Hale).