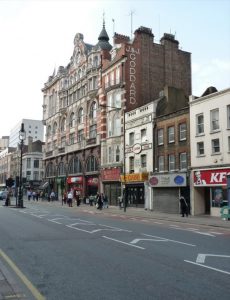 J. & J. Goddard was at 68 Tottenham Court Road until 1968. The last address I could find for them was at 37 Union Street SE1, London, in 1970.  Visible from the Goodge Street Station, the “J.& J. Goddard” sign continues to look good, because it was set in tile, not just painted. 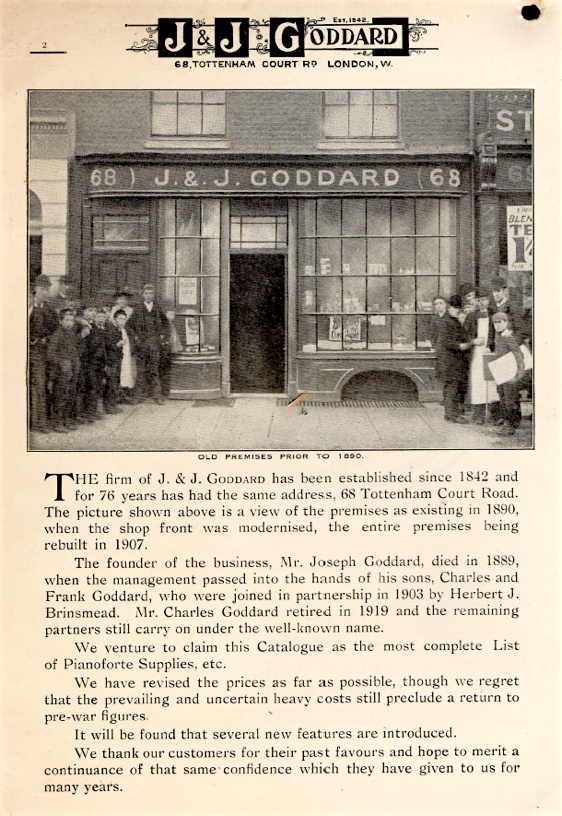 I hope that these children were not involved in child labor. 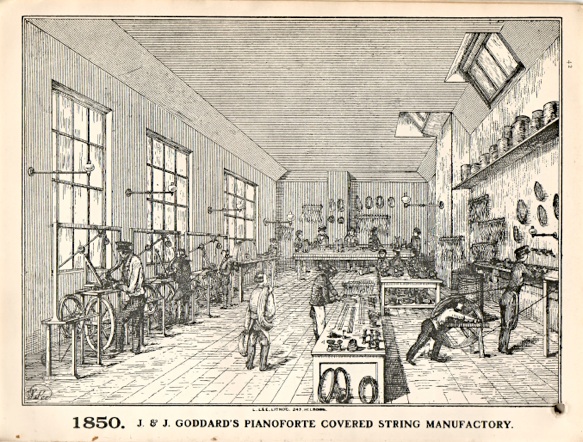 Much was happening at Goddard’s in 1850.

Richard William Reynolds was born on 23 September, 1851 to Matthew Richard Reynolds and Louisa Elizabeth, and Baptised on 9 May 1856 at All Souls Church, in St. Marylebone.  R. Reynolds was described in British trade publications as “music smiths; [with] Tuning hammers and Tuner’s kits for tuning and repairing.”  Richard and his son operated from 4 Upper Rathbone Place, London, circa 1885, and into the 1890s.

Reynold’s entry in the International Inventions Exhibition for 1885. 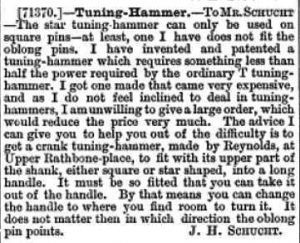 Reference to R. Reynold’s tuning hammers by J. H. Schucht in the “English Mechanic and World of Science,” on 9 May 1890.

By 1890, Richard Reynolds was prominent in the London piano toolmaking business.  In the Victorian era, piano manufacturing was a major industry, with numerous specialists.

In 1891, Richard Reynolds was living in London with his wife Helen, and six children living at home. Reynolds listed his vocation as “Ironmongers and packer:”  Reynold’s son, Richard Jr., was an “ironmonger’s assistant.”  Products from the Reynolds shop would like likely be packed to deliver locally, such as for Goddard and George Buck over on Tottenham Court Road, as well as be shipped to the distant corners of the British Empire.

At the time of the 1901 census, five children were living at home with Richard Reynolds and his wife, Helen, and he stated his profession as “ironmongers and stockkeeper.  Worker.”  Utterly without pretense.

In 1921, as shown in The Music Trade Directory, vol. 32, R. Reynolds was located at L.W. S. R. Arch, 192 Stamford Brook Station, Hammersmith, W. “Tuning hammer and tuner’s kit maker.”  This would have been a successor, like his son, Richard Jr., or a younger relative, like W. J. Reynolds.

This was the latest entry that I could find for this business. 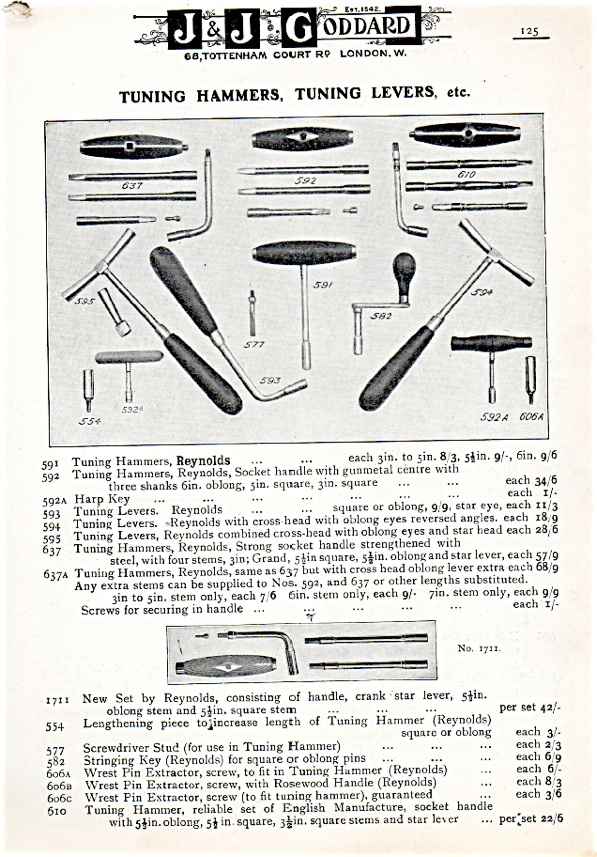 Reynolds tuning lever with square socket, not pictured above. All steel, with hollow ground screwdriver inside the handle. Reynolds products shown in these photos strike me as no-nonsense and utilitarian — but very well made. 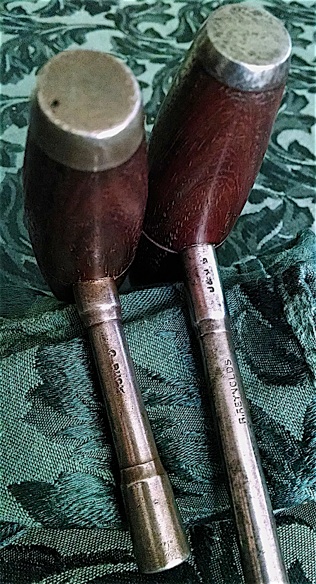 Two R. Reynolds tuning hammers with dealer markings and hard mahogany handles. On the right is a signed R. Reynolds with “J.& J. G,” and on the left is a George Buck hammer with what looks like R. Reynolds filed off.

George Buck was another tool dealer, just up the street at 242 Tottenham Court Road. They catered to many trades, which included a line of piano tools. 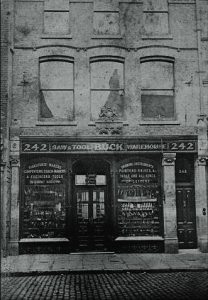 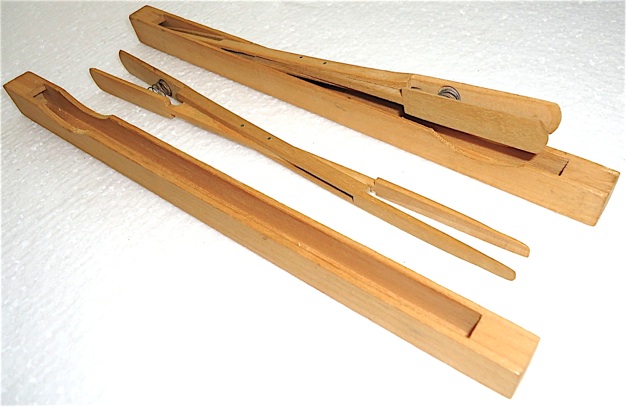 Papp’s tuning wedge, “the fastest muting wedge in the world,” according to Fletcher and Newman Ltd. Papp (of Papp and Son, piano makers , Portsmouth, UK) invented this tweezer-type mute in 1886. It is used for uprights to stop any two strings of a trichord from sounding, utilizing outward pressure from the spring action. This tool does make quick work of muting strings while tuning. The old Papp’s mutes were made from very light wood, until switching to nylon in the 1960s. Thanks to Bill Kibby for this information. 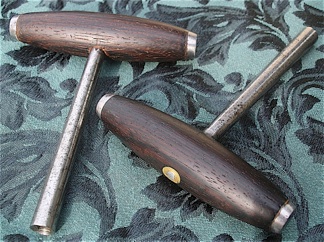 Stock number 610, a “reliable set of English manufacture.” The small illustration in the catalogue hardly does it justice. More ornate than Reynold’s work, this hammer looks like it could have been made a century earlier. Well made, with four carefully fit rosewood infill pieces, it’s hard to see why tuners would pay more for Reynolds hammers. This speaks to Reynold’s reputation, as his equivalent sets were roughly twice as expensive. All of the attachments were marked “STEEL.” This STEEL inscription also appears on a number of English and Scottish infill planes. 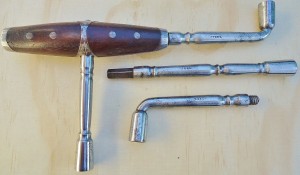 This came as a set, inside a custom-made leather fold-out.

R. Reynolds Universal tuning hammer. No 637 in the 1920 Goddard catalogue. 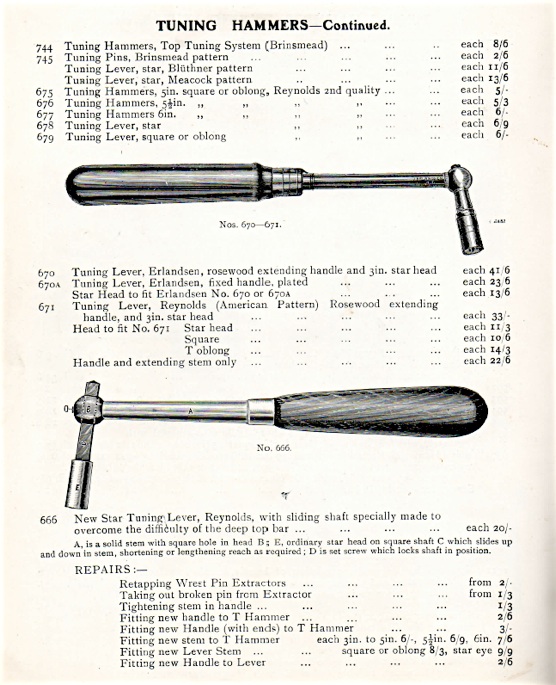 If anyone knows what a Meacock pattern tuning hammer is, please enlighten me. I did find a Samuel Meacock (1826-1903), who was an organ builder and piano dealer in Doncaster, Yorkshire. 1920 catalogue, continued.  Erlandsen had “more than a national reputation,” as quoted in a 1918 article in the “Music Trades Review.” Erlandsen tools were also featured in the Otto Higel Co. catalogues, out of Toronto, Canada.

Goddard’s no. 90 c. 1940s catalogue, with one page of tuning hammers compared to two pages in 1920. Reynolds was not mentioned. No. 988 is the ‘Steinway” pattern lever that was later offered by Fletcher and Newman and by Heckscher Ltd. Reynolds was carried extensively in Goddard’s no. 70 c. 1930s catalogue, as well as Erlandsen tuning hammers.  No. 989 was intended, at least partially, for sight impaired tuners. 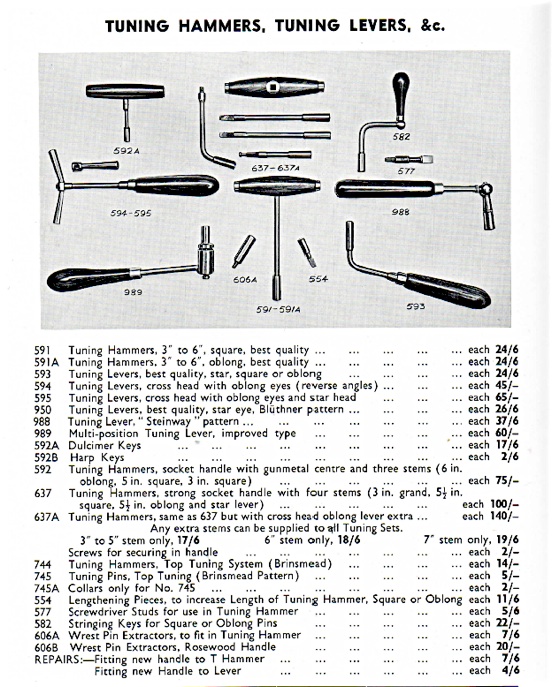 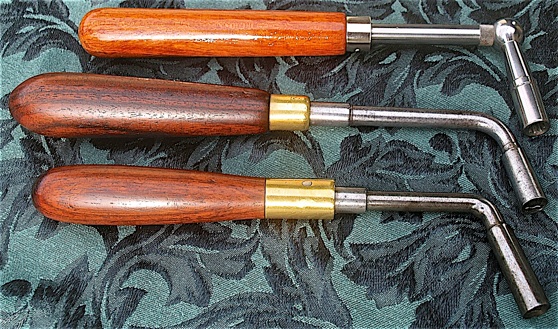 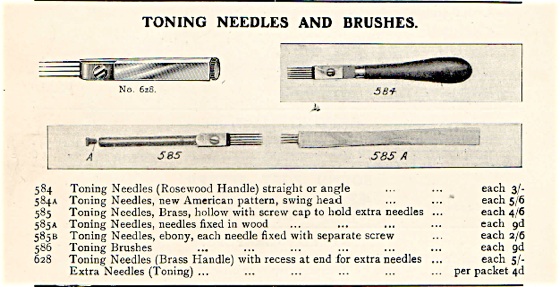 Voicing tools in the 1920 catalogue.

Voicing tool No. 584 (foreground) and possibly an earlier version of No. 585 (middle); Curved type in back.

Even though George Buck sold excellent drillstocks up the street at 242 Tottenham Court Road (or perhaps because), Erlandsen’s was still depicted in trade list no. 50, circa 1920. Goddard’s trade list no. 80, circa late 1930s, also included the Erlandsen bow drill. 1938-1939 was the last entry for this tool that I have found: 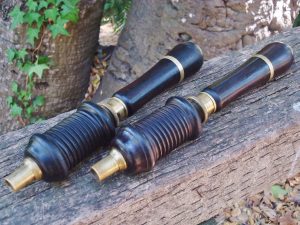 Two Buck bow drill stocks, found together, one is rosewood, and the other is dark rosewood with the spool possibly ebony. The rosewood drill is shorter and narrower than the darker one, but the shape of the handles suggest that they were made at the same time. Both Buck drills likely were used on the same factory shop floor.

Inside the caps of the Buck drill stocks: serial numbers 165 and 168. 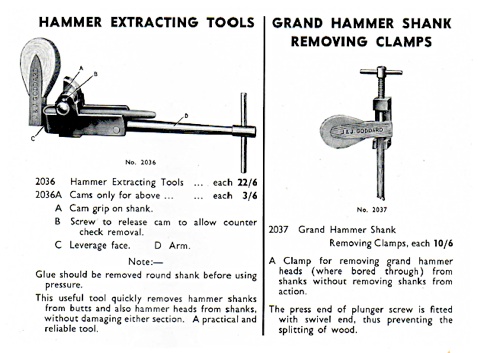 G.F. Baker hammer extractor, with provisional patent, and Baker string coil lifter, based on a screwdriver. 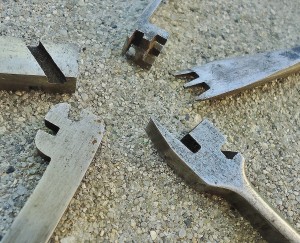 Piano tools made by W. Baker, London.  William Baker appeared in the 1881 UK census, listed as a tool maker born c 1837, in London. Not sure if this is an older relative of G. F. Baker. 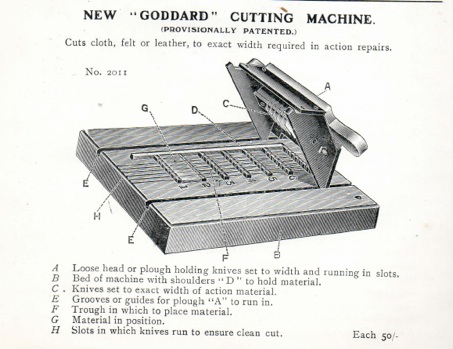 Goddard’s unique cloth, felt, and leather cutting machine. In restoration, these materials are being cut to custom widths constantly. c. 1920. 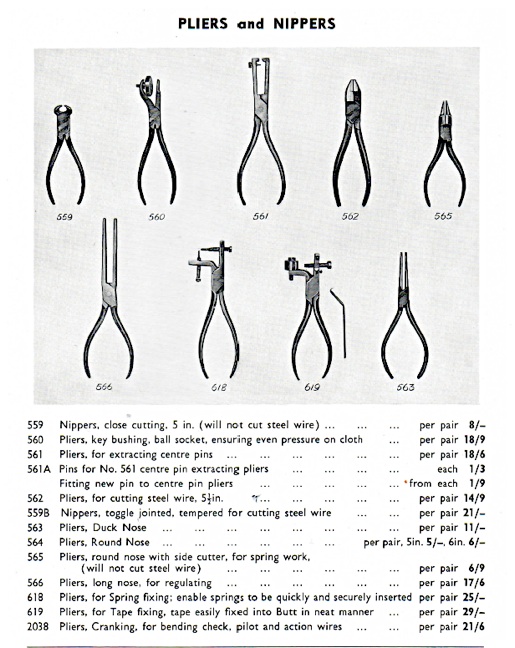 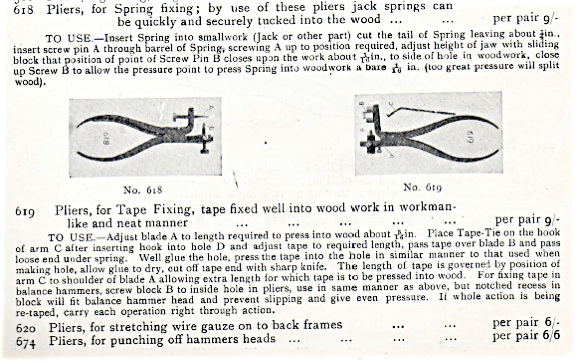 No. 561, based on Wynn Timmons pliers; extracting pin moves on a sweep rather than direct thrust. 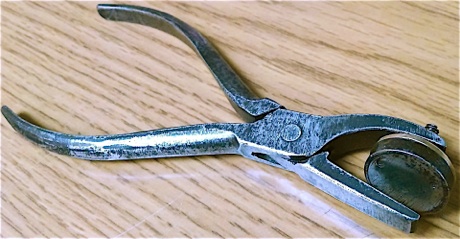 Parallel piano pliers–meaning that the jaws are parallel at the width of an average piano action part. Sold by George Buck. Similar to #566 in the Goddard catalogue. 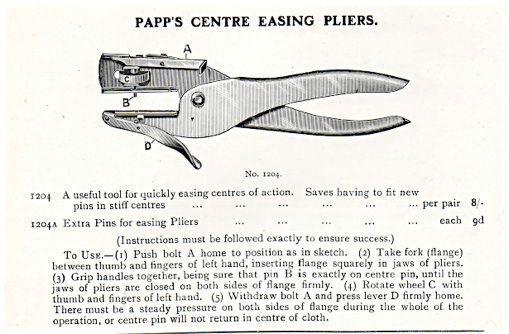 Papp and Son, pianomakers, Portsmouth, U.K. is best known for their tweezer mutes, which were patented in 1886. c. 1920 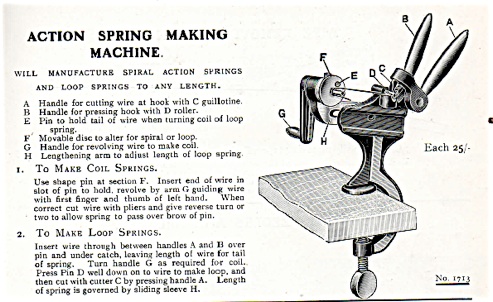 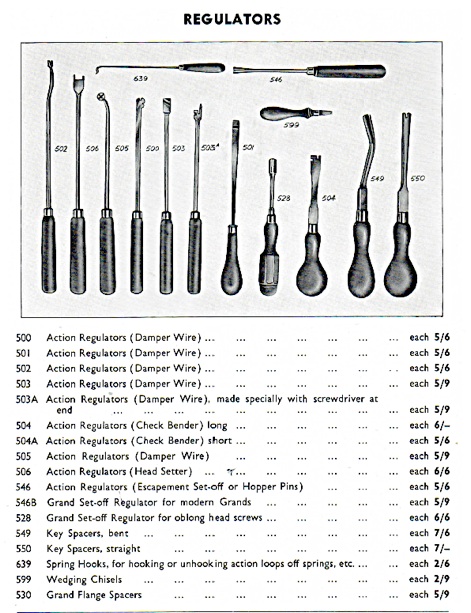 1940s. Three tools on the right are actually based on Sheffield type screwdrivers. 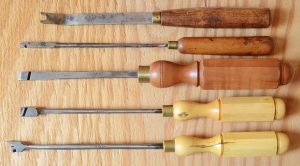 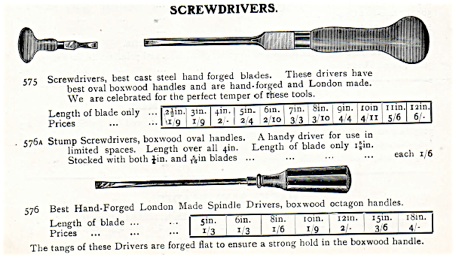 Goddard carried a large selection of planes, including a comprehensive range of wooden bench planes and Stanley iron planes. Goddard wrote, “any pattern plane supplied” in their 1920 catalogue. This steel-soled gunmetal bullnose plane has “Goddard London” inscribed on its side, which is partially visible in this photo. 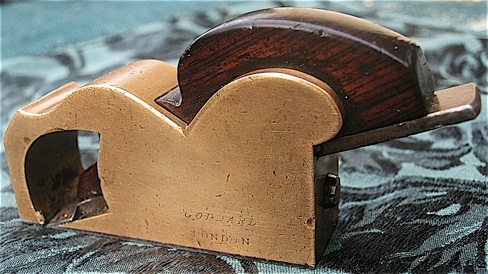 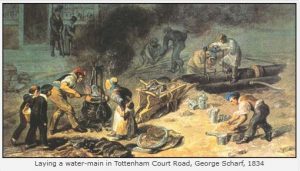 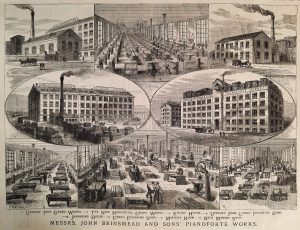