Adjustable handles for piano regulating tools became popular for the mobile piano technician relatively soon after their introduction around 1900. Since a good number of regulating tools were made to be compatible with it, including screwdriver blades with sizes up to 5/16″ for general driving, these handles were used constantly. In order to accommodate the different functions of all these tools, Frank Hale at Tuners Supply in Boston offered their combination handles in small, medium, and large sizes. As far as I know, there is no current supplier who offers three sizes, and Hale was not known for having a selection of tools as large as Hammacher Schlemmer or American Felt Co.

By using combination handles, piano tuner technicians were able to save space and lighten their load when carrying their toolkit from job to job. When field work was done in a large metropolitan area, and public transportation was used, every extra ounce of weight made a difference. I can attest to this personally, as I used to take the subway to various jobs during part of my years at at Steinway Hall in Manhattan.

By going to combination handles, instead of individual handles for each task, the piano technician gained something but lost something as well. Individual handles would be made specifically appropriate for a given task, but they would be bulky and unwieldy when carried in quantity. When Hale offered three sizes of adjustable handles, he was attempting to compensate for this loss of appropriate specificity. A good example of correctly-sized handles for the tool and the task can be found among selections of good vintage and antique chisels; many modern chisels though, no longer have appropriately sized handles. Because adjustable piano action handles were in use so frequently for a large range of tasks, it was important that the handle be appropriate not only for the hand of the user, but for the tool that was attached, and for the specific task engaged. 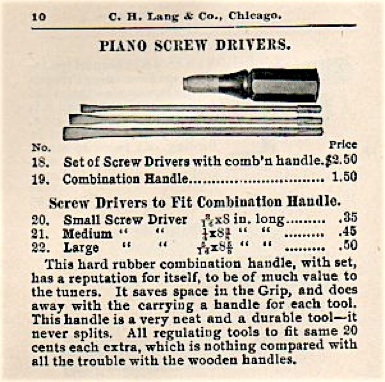 C.H. Lang, 1905: “All regulating tools to fit [handle] 20 cents extra, which is nothing compared to all the trouble with the wooden handles.” Lang also referred to the problem of splitting wooden handles, which happened often when the tang was inserted with too much force. 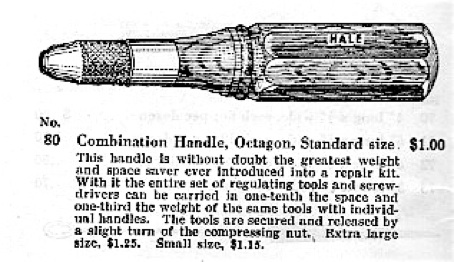 Hale combination handle 1935. Three sizes were offered, which was a lot considering the rather spartan amount of tools offered in the Hale catalogs. Today, two sizes, at most, are available from any one supplier of combination regulating handles. 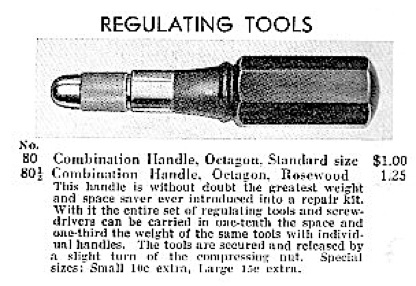 Hale combination handle 1940. Three sizes, and rosewood was an option for 25 cents extra. 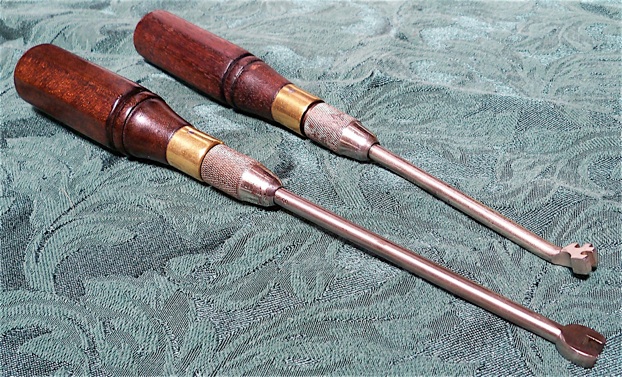 Hale went from hardwood handles and optional rosewood handles in the early 1940s, to a durable black plastic, right after World War II.  In their March, 1957 Catalogue, Hale stated that they introduced the interchangeable handle to the repair trade “over 50 years ago,” or circa 1905.  This was around the same time as American Felt Co. and Hammacher Schlemmer brought their versions of the interchangeable handle to market as well.

The black plastic was very strong, and was resistant to the most careless abuse.  I know one well-known piano technician who used his Hale handle for playing fetch with his dog!

Original Hale “Friction Grip” handles, in mahogany, with No. 25 German Silver center pin as locking bar for the inserted tool.  I purchased these new from Hale in the 1970s. The Hale drop regulator is 3 1/2″ long. 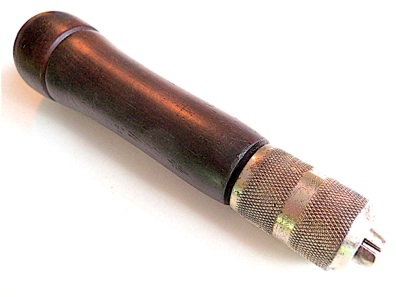 The Hale small mahogany tool handle was a prescient idea, which anticipated other small regulating tools such as the Yamaha and Wessell Nickel and Gross drop regulators.

Here is an early example, by Millers Falls, patented Jan. 14th, 1868 (Amidon jaw chuck). This same chuck was also used on the Millers Falls #16 brace, which was intended for pianomakers. No. 16 had an unusually narrow 4-3/4″ sweep, consistent with the traditional pianomaker’s wooden braces, and was manufactured from 1884 to 1901. 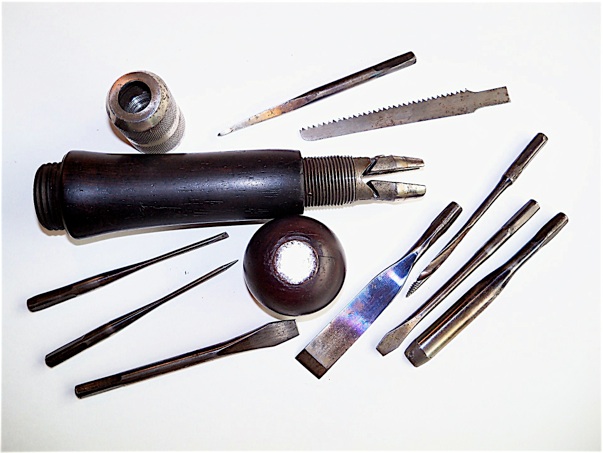 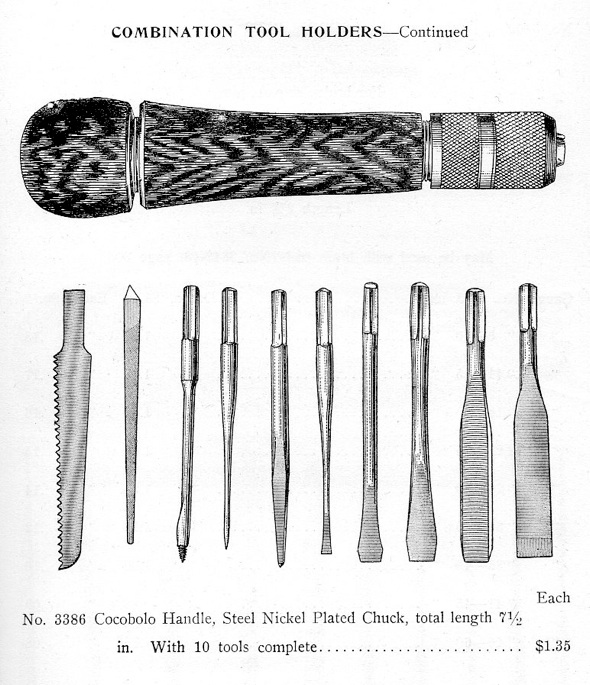 A difference between the Miller Falls type of tool handle and the patented handle shown below is that lateral and longitudinal movements of the tool are held in check by two separate functions in the tool, in a way not unlike the present piano regulating combination handle. This differs from the older tool handle above, in which both potential movements of the tool bit are controlled by one piece of hardware, the collet, or in this case, the chuck. 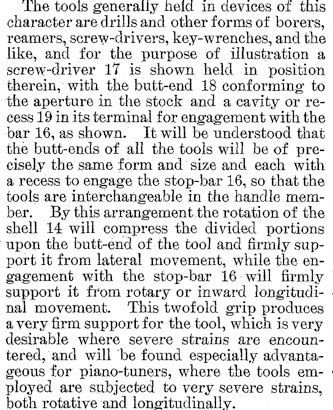 The “severe strains” L. S. Davidson is referring to would seem to be more related to tuning tools, rather than regulating tools.

Pad Handle in rosewood and nickel plated hardware, by Bagshaw and Field, Philadelphia.

Going back further in time for multi-tools, we have the Pad handle, which was included in the 1791 tool inventory of Christopher Gabriel.  The chuck accepts a smaller version of bits made for the brace, with a nick cutout to engage the spring lock.  This particular rosewood pad handle by Bagshaw & Field was a late example of the type, circa 1880.

American Felt Co. 1911. This is the standard type, with angled cutout at the 1/4″ base of the tool. Its still the standard ‘clutch’ design used today.

Richard Reynolds, a piano tool maker in London, made this combination regulating set, c. 1920. The handle looks much the the American Felt combination handle, c. 1911. No. 686 is a wire bending tool with a screwdriver attachment, which is a regulating tool unique to England.

Two choices of regulating sets were available in Goddard’s no. 80, circa 1938 catalogue. Reynolds products were consistently the more expensive choice across the board.

J.&J. Goddard Regulating Set with thumbscrew lock on handle, in the 1940s catalogue.

In the 1940s, J.& J. Goddard in London moved to a thumb set screw instead of a collet. G. F. Baker offered a similar design in their c. 1950 catalogue, and Fletcher & Newman offered same in their 1976 catalogue. 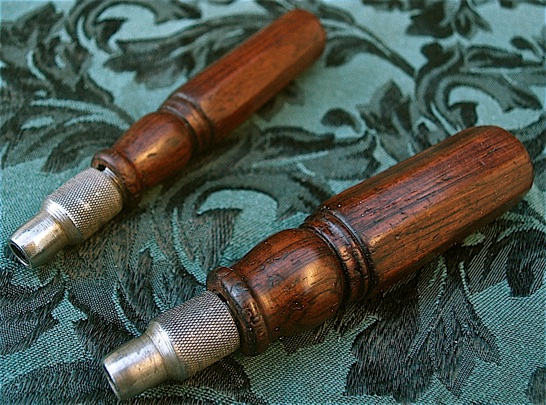 Another collet and compression nut type, found with a pre-WWI toolkit comprising of Erlandsen, H.S., and A. F. tools. These also accept the modern or standard arrangement.

I’m not sure who sold these, perhaps American Felt Co. by process of elimination. H.S. offered combination handles that accommodated the traditional tang.

Unmarked, with a London pattern handle, and hardware similar to the American Felt Co. example above.

Early combination handle with friction fit hardware that is heavy and well machined. Tool with 1/4″ base and angled cutout attached. 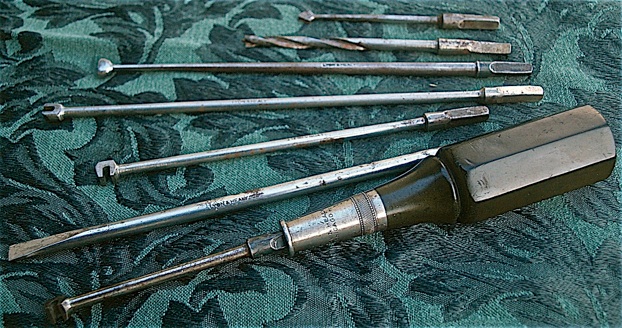 Lyon & Healy combination set, handle made of ebonite, fairly similar to C. H. Lang’s before it. The proprietary L&H tools have a square base which were designed to work with this particular handle only.

The proprietary L&H tools have a square base which were designed to work with this particular handle only. To release, you depress a tab on the back of the handle by tapping down on a hard surface. It works well (as long as one doesn’t do this on the piano cabinet!). Circa WWI era. 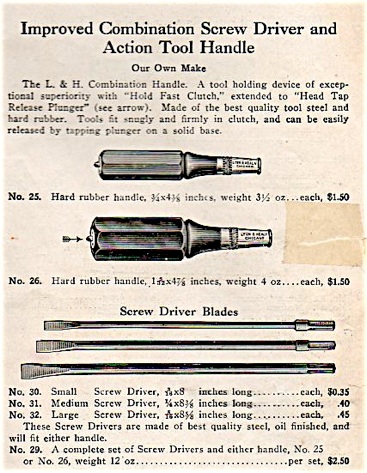 From Trefz 1935 catalog. Trefz carried the full Hale tool line in 1935, but I’ve seen a range of proprietary regulating tools, made post-WWII. Rebuilding supplies, however, were a focus of this company, and pinblock, bridge, and hammer duplication was prominently featured. A large range of grand hammershanks and flanges was carried as well. 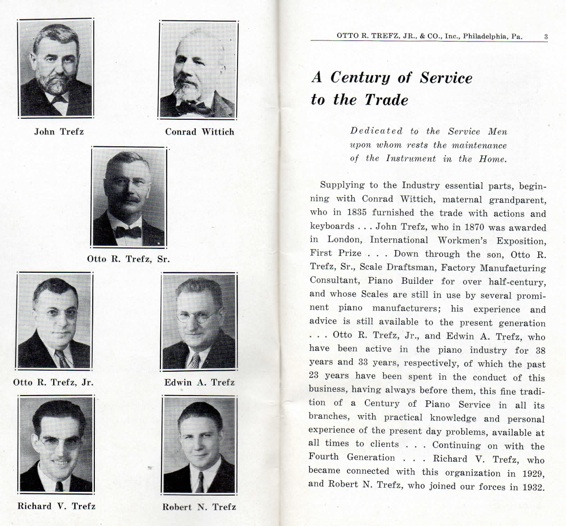 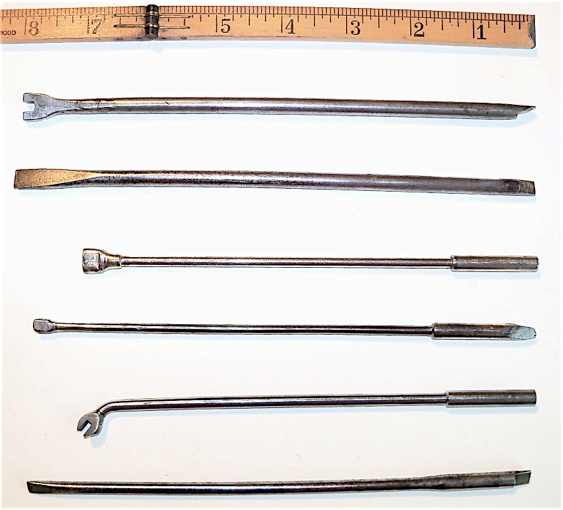 These interchangeable tools will fit all of the handles shown above, and were made within that time period as well. 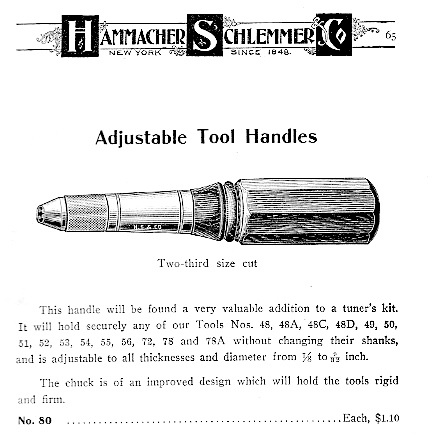 H. S. and Co. made their adjustable handles to be compatible with the traditional tangs found on piano regulating tools. c. 1918. 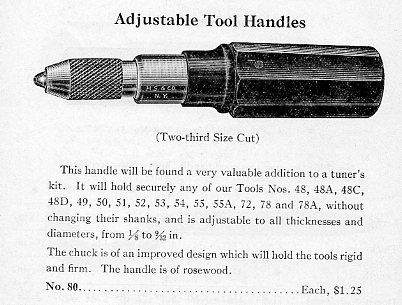 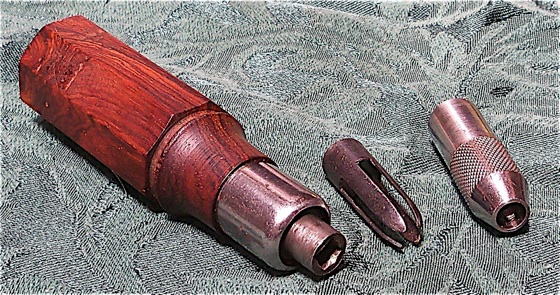 H. S. adjustable tool handle, disassembled, and same as the catalogue entry above, for use with piano regulating tools having the traditional tang. This handle does hold these tools securely. Since the traditional tang became obsolete at about the time this tool was produced, this one has had almost no use, as seen in the crisp edges of the facets of the octagonal handle:

This is a handmade combination handle made from a modified drill chuck which was originally intended for use in a hand brace. The set screw fits inside a key spacing tool, and the socket accepts C. H. Lang regulation tools. I found this tool in Jonesport, Maine, in August, 1979, as part of a tuners set. 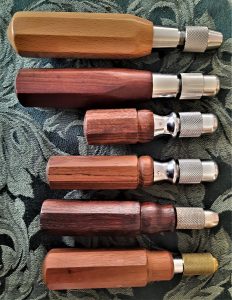 John Ford made his combination handles from walnut wood.  Ford’s early thumbscrews were brass-anodized steel in the 1970s, then solid brass in the 1980s.  Ron Conors had one of these worn down to nothing.  The APSCO handle was in rosewood, and purchased circa 1982; it may have been one of the last batches of product using Amazon rosewood.  Notice the contrast of the wood as compared to the Yamaha regulating handle, which looks more like an Indian type of rosewood.  The large Yamaha handle was purchased around 1998 and the small Yamaha handle, which I used a lot, was purchased in the 1980s, when these tools were first imported to the U.S. en-masse. There is a difference in fit and finish: the 1980s example is much more refined in both the machining as well as the plating.  The Bolduc handle is made of a red mahogany, and has an asian-style floating collet.  It is possible that the hardware was bought in, and the handle was turned in-house.  The Chinese handle, in beechwood is huge, and would be suitable for using a screwdriver to open piano case screws, among other things.  Quality on this large Chinese beech tool handle is good.