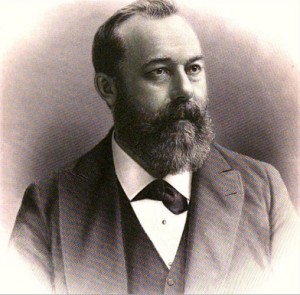 Alfred Dolge (b. 22 Dec 1848 Chemnitz, Sachsen, Germany; d. 5 January, 1922 Milan, Italy) was a major figure in the American piano industry, he remade the small town of Brockett’s Bridge, on the edge of the Adirondacks, into what became Dolgeville, to make soundboards, hammers, and other components in 1875. Dolge invented a new hammer-making press, which is still used today by some hammer makers. He also developed and produced a cylindrical 5′ soundboard planer, which could process 300 soundboards a day in comparison to a single craftsman who would be able to hand plane perhaps ten soundboards, at most, in a day. His factories permitted a number of piano manufacturers to outsource more components in their pianos, lowering costs, and making pianos more affordable for the middle class.

Dolge wrote Pianos and Their Makers in 1911, a veritable who’s who of the American Piano industry during his working lifetime. But perhaps Dolge’s most important contribution was his practice of providing his 2,000 workers with pensions, profit sharing, and life insurance. He wrote about this in his book The Practical Applications of Economic Theories in the Factories of Alfred Dolge (1896). His ideas gained attention in Germany and France. 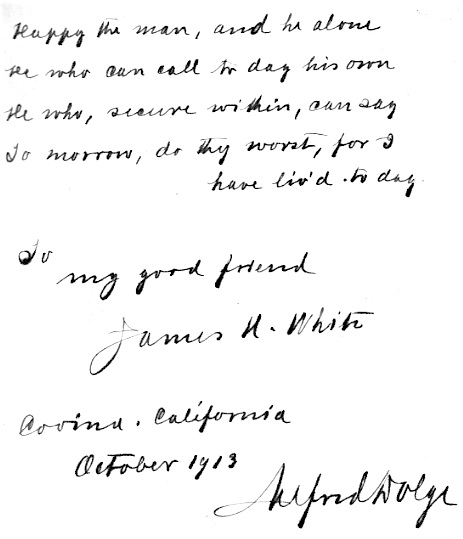 Alfred Dolge’s signature, and quotation from John Dryden’s (1631-1700) poem, “Happy the Man,” inscribed in a first edition, volume II, of Pianos and Their Makers.

Alfred Dolge’s signature, and quotation from John Dryden’s (1631-1700) poem, “Happy the Man,” inscribed in a first edition, volume II, of Pianos and Their Makers. Dolge believed in good wages for workers, partly out of a sense of fairness, but also because he saw them as consumers foremost, which was seen by some as a betrayal of his class. Dolge was forced to relinquish his businesses by what amounted to a conspiracy in April 1898.

James H. White, was involved, along with his father and brothers, with Estey Piano and Organ Co., and later, Wilcox and White Co., makers of the Angelus Player piano.

Here is an 1892 catalogue picture of the Alfred Dolge Factory complex, including the American Felt Company and soundboard factory, also known as the Dolgeville Mill. 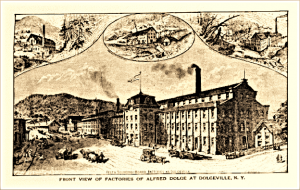 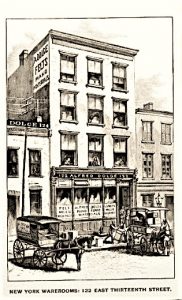 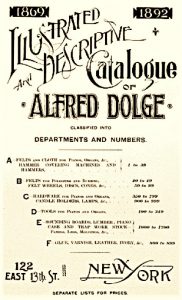 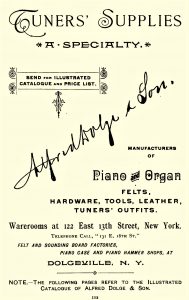 Dolge’s “Tuners’ Supplies” advertisement appeared a five page insert in the back of the 1893 book, The Piano; Scientific, Technical, and Practical Instructions relating to Tuning, Regulating, and Toning by Daniel Spillane.  (b. June, 1859 Cork, Ireland–d. 21 October, 1893 New York, N.Y.)  Spillane was mostly known for his 1890 book, History of the American Pianoforte; its Technical Development and the Trade.  Frank W. Hale had his own machine shop, which produced his tools, at 88-94 Wheatland St., in Somerville, MA.  Dolge’s piano tools were produced in large part by the Erlandsen Co., in New York City (to Dolge’s specifications), with a possible in-house machine shop as well.

The monikers “Tuners’ Supplies” (Dolge), or “Tuners Supply Co.” (Hale), while descriptive of the nature of their respective businesses, were also somewhat generic in nature.  Any similarity of the titles was coincidental; the machining characteristics, or ‘signatures’ of the products from the two sources of piano tools were distinct and recognizable as such. 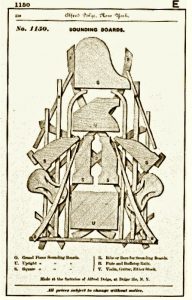 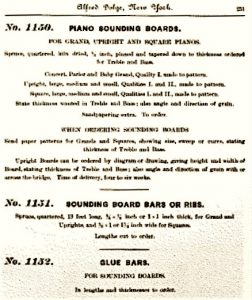 Custom soundboards made to order. 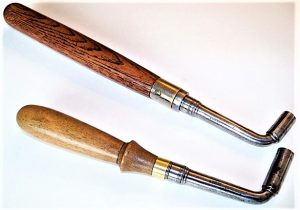 Two A. Dolge tuning hammers, in the traditional German, or stimmhammer, style, with screw-in gooseneck stems. The “A. Dolge” tools date from 1892 or earlier, before Alfred’s partnership with his son, Rudolf Dolge.

A. Dolge extension hammer, pre-1892; after close examination, almost certainly made by Erlandsen. 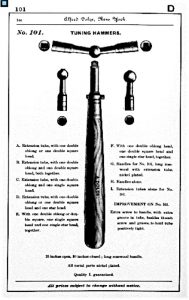 Dolge (Erlandsen) extension hammer, as shown in the 1869-1892 Dolge Catalogue.

Universal tuning hammer. This one came with the “T” tube marked “A. Dolge.” 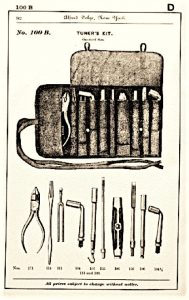 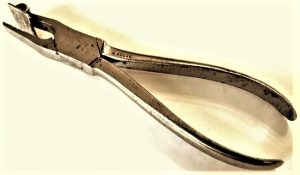 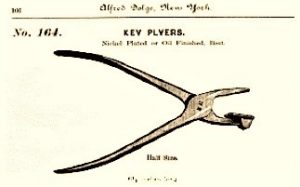 Another Dolge “T” hammer socket, this one with stringing hook. 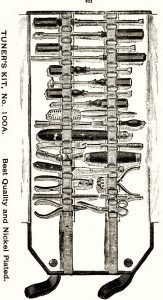 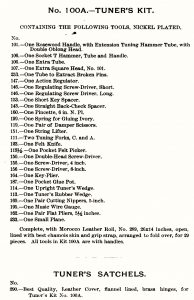 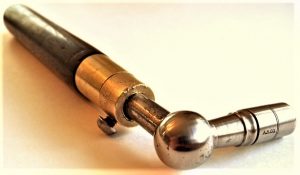 Adjustable tuning hammer, early, with brass collar, American Felt Co. Found with some of the Dolge tools above. Other A. F. inscribed tools appear in the tuning hammers and voicing tools sections.

Similar hammer, as to the example in the 1892 Alfred Dolge Catalogue. 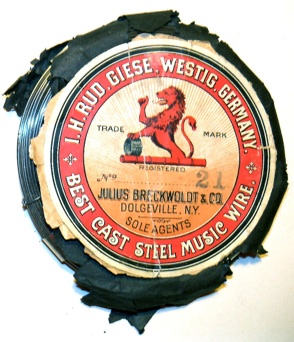 A. Dolge and Son regulating wire benders, found at the Hornung estate in 1990. These wire benders would probably date between 1893, the establishment of the partnership of Alfred and his son Rudolf, and the dissolution of the partnership in 1898. The handle of the offset tool at the top is marked “Tuck,” the tool company in Brockton, MA, that made many of the beautiful handles for regulating tools in the nineteenth to early twentieth centuries:

A. Dolge and Son regulating wire benders, found at the Hornung estate in 1990. 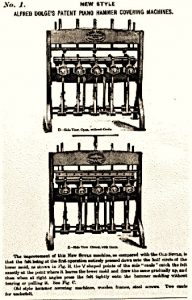 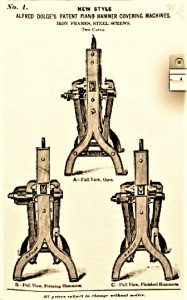 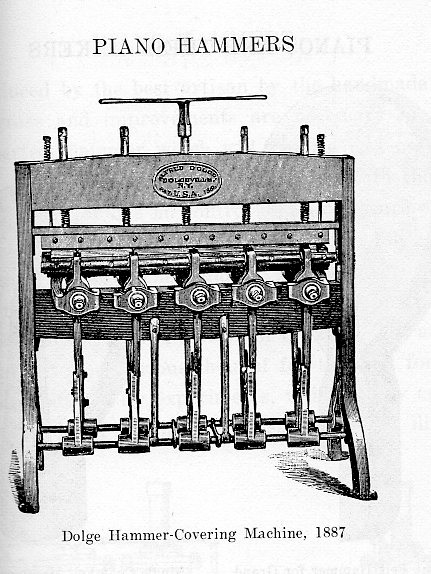 Two illustrations of the Dolge hammer-covering machine, from Pianos and Their Makers. 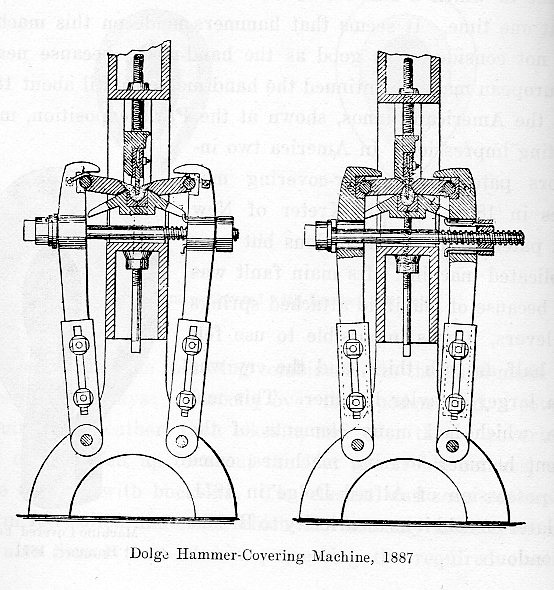 Same hammer, as shown in the 1892 Alfred Dolge Catalogue. 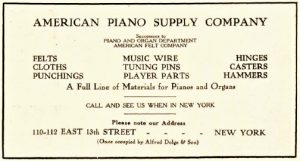 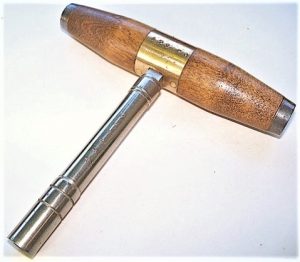 APS & CO stringing hammer, with bronze inside the maple, making for a heavy handle. From the American Supply Co., 1914-1927.

After WWII, the Dolge Piano Factory was revived as the North Hudson Woodcraft Corp.  This facility made piano components for another 50 plus years. Steinway & Sons contracted with them for some of their parts.  The late Sam Camilleri used North Hudson soundboard panels in his Steinway rebuild projects. Camilleri owned what was considered by many to be the best piano rebuilding shop in New York City during the 1970s and ’80s.  By 2002, North Hudson Woodcraft Corp. divested from the piano business. Today, they supply lumber and components for general furniture. 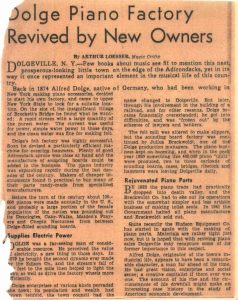 Revival of the the Dolge Piano Factory as North Hudson Woodcraft. Article by Arthur Loesser, circa 1950.  Paper unknown. 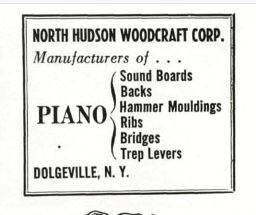 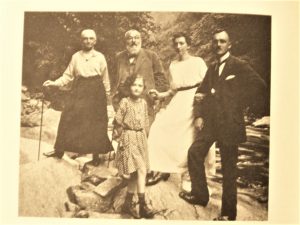 Alfred and Anna Dolge in the Hartz Mountains, Germany, in 1921. Photo from Michael Cooney. 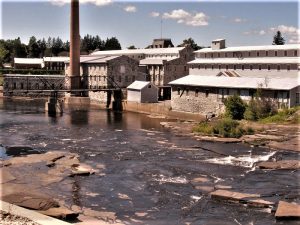