Photo by photographer Steve Hollis Johnson, May 2017.  Taken as part of an upcoming book about people who work with their hands for a living. Photo by Steve Hollis Johnson.  Removing the action in preparation for stringing.  Piano is a 1920s Steinway model “M.”

In 1986, my wife and I moved to the San Francisco Peninsula, where we have raised our two children. I established an independent piano-service business, which has included a number of long-standing accounts with familiar universities, concert venues, and schools in the area.  This has also included well-known musicians both here, and earlier in New York City.  But it is not my style to drop names, so I will leave it at that.  The majority of my work, however, is tuning in the home and in private teaching studios. As a “Business Affiliate” Member of the Music Teachers Association of California (MTAC), I work closely with a number of piano teachers on the Peninsula. Photo by Steve Hollis Johnson. Photo of mostly specialized tools for piano action work within a leather tool roll.  For daily use.

Since the introduction of this website in 2005, I have written extensively about historical hand tools made for the piano industry.  These webpages have resulted in requests for publishing articles for periodicals within the piano technology field as well as in the historical hand tools/woodworking area.  Much of the reason I have mounted this presentation of antique traditional hand tools used in piano work is to make some record of this particular vocation: it’s part of a world that is gradually being left behind. 19th century voicing tool made by J.D. Weickert in Leipzig, Germany, a world-class felt manufacturer. Piano is an old 7′ 4″ Grotrian grand that I restored in the late 1990s.  Lowest tenor damper was displaced as part of the original design, in order to clear the large plate strut. 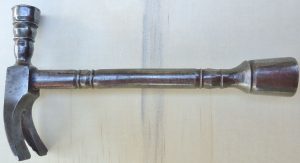 During the 40 years that I have serviced pianos, from the most modest spinet to world-class concert grands, it is always the person playing and/or studying the instrument who is most important to me. Pulling the restrung Steinway “M” piano up to A440.  Photo by Steve Hollis Johnson.

I have now fully retired.  Thank you for your support over these many years.  Wishing you all the best.