Throughout recorded history, and to the present day, there has been no universally predominant standard musical pitch. Since 1939, there has been a concerted effort to establish A440 as the universal standard pitch, and A440 has gained considerable acceptance over the years, but even so, pitch has ranged from A415 for some early music ensembles, to A444 for some orchestras. The diversity of musical pitch was perhaps even greater in the nineteenth century, however, and varied between A423 and 457. In the 1885 Hammacher Schlemmer catalog, both A and C forks are offered for sale, but curiously, no pitches are given for either:

The comprehensive 357-page American Felt Company catalog for 1911 has a number of forks available both in traditional polished steel as well as the new “blued” forks (to prevent rust) between a low pitch of A435 and a high pitch of A454. It was common to tune very high A between the 1860s until the turn of the twentieth century, in the U.S. as well as much of Europe. Here are two pages from that catalog: 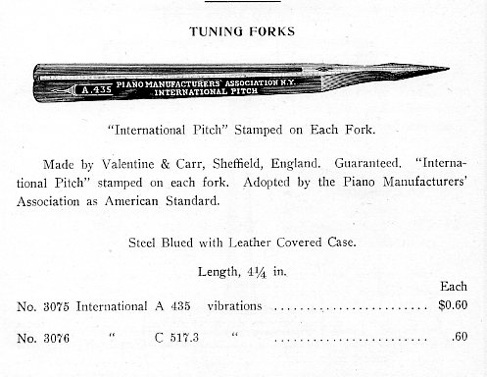 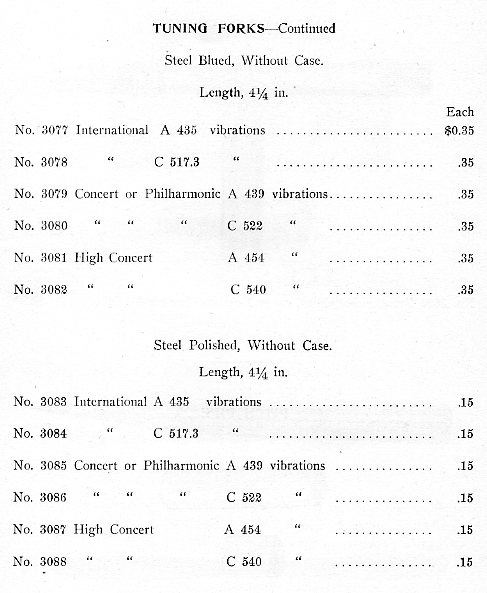 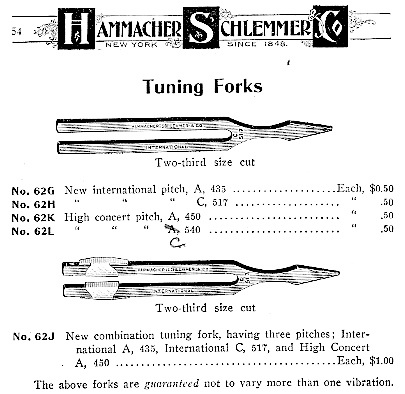 Even in 1918, H. S. and Co. did not include an A440 fork! Surprisingly, an A450 fork was still being sold. These high pitched forks are quite uncommon today; they must have been thrown away en masse.

A Practical Manual for the Piano and Harmonium Tuner was written by E. Nugues, H. C. Pouget, and Ch. Martin, published by Leon Pinet and Co., a major supplier of tools and supplies for these instruments since 1840. In this document there is a long section on the French decree of 1859, whose authors endeavored to establish a uniform pitch in France of A435, later known as “International pitch.” The French physicist Jules Antoine Lissajous had observed in 1855 that, “…the pitch varies not only from town to town and country, but it changes in one country and in one theatre from year to year.”

The following webpage provides some photos of Lissajous-type tuning forks and a description of some of the acoustic work of Lissajous:

On the 1st February 1859, the Commission handed its report to the Minister of State. This report was followed by a decree dated the 16th of February 1859, fixing for France an official pitch having 870 simple vibrations per second at 15 degrees C., and known by the name of diapason normal or normal (standard) pitch. 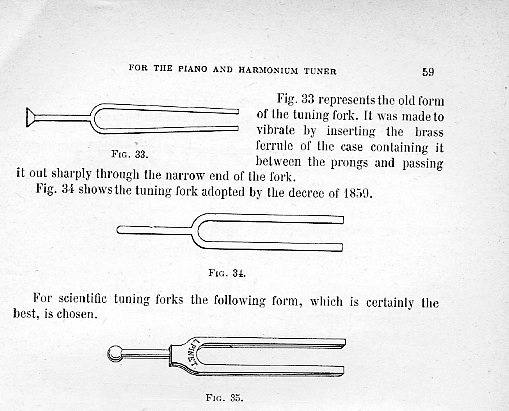 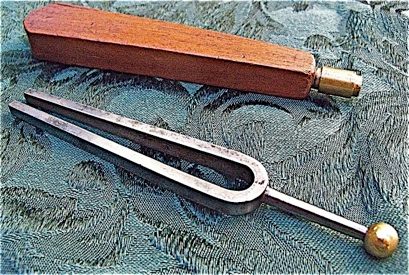 Old French fork which is sounded by pulling the brass ferrule of the case through the small opening between the tines of the fork.

This fork with a brass pedestal has a low pitch of around A423.

Alfred Dolge endorsed the International pitch of A435, as well as Chickering, Mason Hamlin, and many other organizations. Dolge followed the decision of the executive committee of the Piano Manufacturers Association of New York. The Piano Manufacturers Association had just been established in 1891, by a number of piano makers, in an effort to quell a strike by a group of piano varnishers. Alfred Dolge catalogue, 1892:

Segrove tuning fork, patented by Segrove in 1885 and 1887, and made by Wurlitzer.

Segrove tuning fork, patented by Segrove in 1885 and 1887, and made by Wurlitzer.

Segrove tuning fork, patented by Segrove in 1885 and 1887, and made by Wurlitzer. The movable bridge provided 12 equally-tempered semitones, and the large adjustable weights provided a means to adjust the overall pitch to any of the numerous pitch standards of the late 19th century. The body of the fork was made of a single piece of steel, as called for in Segrove’s patent:
Another adjustable tuning fork, early 20th century. The higher the bridge (away from the crotch of the fork), the lower the pitch, and the lower the bridge, the higher the pitch. The example below has individual adjustable weights, which, when moved to their seven adjustment points, approximate seven (c to f#) semi-tones of the equally tempered scale. 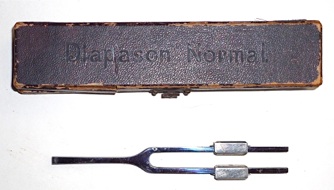 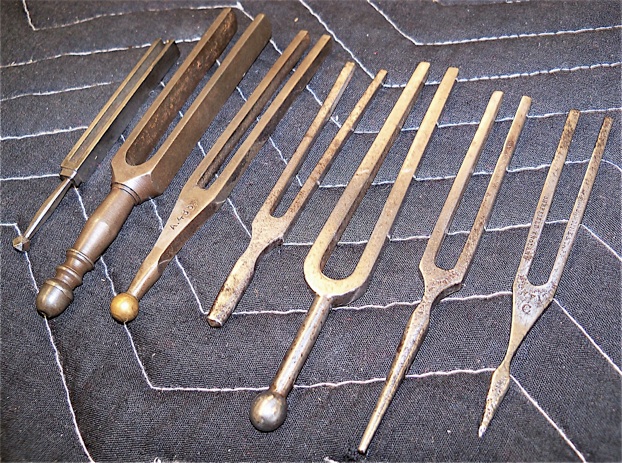 Here are a range of old tuning forks of various forms, ranging in pitch from A422 to A453.

Dr. Edward Swenson has written an excellent article which includes a comprehensive list of many pitches produced by various tuning forks, starting from the time of the invention of the tuning fork by John Shore in 1711.